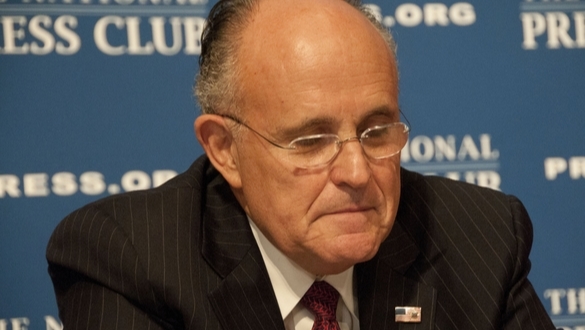 President Trump’s personal lawyer Rudy Giuliani Blames NYC Mayor Bill de Blasio for the new wave of anti-Semitic attacks. Yet it was only two weeks ago that Giuliani principal client President Donald J. Trump described Jews working in real estate as “brutal killers.” Clearly showing that the wave of anti-Semitism is emanating from Washington and the White House in an attempt to curry support from White Nationalists.

On Saturday, five people were injured — two critically — when a man burst into a rabbi’s home in the suburb of Monsey and began slashing at a crowd gathered there for a Hanukkah celebration.

Meanwhile, Rudy Giuliani, President Trump’s lawyer, has earned a national reputation for repeatedly whipping up anti-Semitism. Last Monday he went off the rails in an alcohol-fueled, unhinged interview that was published on Monday where he ranted against ‘a**hole’ prosecutors from his old office of the Southern District of New York, and openly attacking George Soros’ Jewish status, spinning one ridiculous conspiracy theory after another regarding the Ukraine fiasco, taking no notice that his fly was open while stumbling and slamming into a wall in his stupor.

Once called ‘America’s Mayor,’ Giuliani gave an unhinged inebriated interview to the New York Magazine on December 8 over some Bloody Mary's at The Mark Hotel, located on the Upper East Side of Manhattan. Perhaps a preview of the insanity he will put on display if and when Senator Lindsey Graham (R-SC) calls him to testify regarding these same completely debunked conspiracies.

Giuliani has only recently come back from Ukraine via first-class travel in the private Jet provided by Dmytro Firtash, one of the most powerful billionaires, pro-Putin oligarchs in Ukraine who has been fighting extradition to the United States for over six years.

Dmytro Firtash isn’t just supplying first-class private jets to Giuliani; he is apparently funding the hunting for fresh dirt to serve President Trump’s campaign against his opponents even though impeachment proceedings are moving fast against the President.

According to Maximilian Hess, who is a Fellow in the Eurasia Program at the Foreign Policy Research Institute and heads Political Risk Analysis and Consulting at AKE International in London, where he also heads the Europe and Eurasia desks…

“Firtash’s reputation stems from his role in fixing Ukrainian gas markets to the Kremlin’s advantage—helping to ensure that Moscow kept a tight grip on its neighbor in the pre-Euromaidan era.”

“Acting through the firm RosUkrEnergo, a joint venture between Firtash and Russia’s state gas giant Gazprom, Firtash not only aided the Kremlin’s political agenda but also enriched himself in the process. The firm paid discounted prices for Russian gas imports while passing major mark-ups onto the Ukrainian government. Firtash thus became a billionaire at the expense of Ukraine’s budget. This wealth gave him the springboard to do business not just in Ukraine, but around the globe, even after allegedly admitting ties to infamous Russian organized crime boss Semyon Mogilevich.”

Serving Dmytro Firtash's best interest, Giuliani didn’t hold back while speaking about the US attorney office’s federal prosecutors (Southern District) over the revelations that he was under investigation for criminal charges in a case that also involves Lev Parnas and Igor Fruman, two of his dirt-digging Ukrainian pals.

He called the prosecutors ‘a**holes’ and ‘idiots’ for investigating him.

Giuliani, who was the US Associate Attorney General in the 80s, stated that he had been in the business for over 50 years and knew how not to commit crimes. However, lobbying on behalf of Dmytro Firtash, accepting private jet travel and possibly financing the digging up of fake dirt on former Vice President Biden may all be violations of Federal Campaign Finance Law and may require his registering as a Foreign Lobbyist.

Giuliani also ranted against Soros, a Holocaust survivor and Democratic Party megadonor, who has frequently been targeted by anti-Semitic groups over the years. He added that Soros had been responsible for appointing all four ambassadors to Ukraine and accused him of using FBI agents. This is an intentionally false Russian intelligence siren song that only further pushes the deep-seated anti-Semitism of Putin’s Russia.

Giuliani's false assertion that George Soros was controlling Marie Yovanovitch, the former US Ambassador to Ukraine, helped convince her removal from her office by Trump back in April when Giuliani started campaigning against her.

When asked about his anti-Semitic views, Giuliani raised a Catholic (on his third divorce) who claimed that he was more Jewish than Soros and accused him of being a horrible person. Giuliani had his fly open throughout the entire interview. Perhaps appropriate symbolism of his being a putz.

While walking into the restaurant, he also slammed into a wall but kept walking as if nothing had happened, noted Olivia Nuzzi, the writer.

Giuliani has often been suspected by many to have alcohol issues. He agreed that he liked his scotch & cigars but vehemently denied being on drugs.

He claimed that the drug-related rumors were completely false. However, he loved having scotch and malts and cigars, he said and called himself an avid partier.

When members of the media and press asked Giuliani what his views were on Nuzzi’s story on Monday afternoon, he texted back and insisted that he hadn’t yet read the piece.