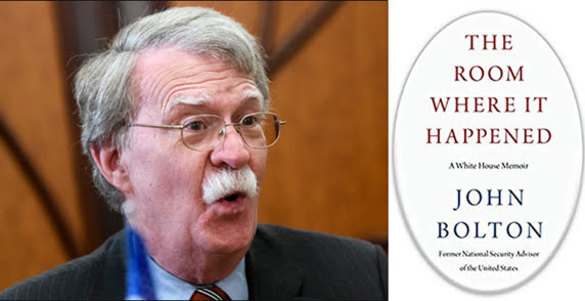 On Friday, Judge Royce Lamberth heard arguments from both the U.S. Justice Department and attorneys for John Bolton and publishing giant Simon and Shuster.  An emergency motion by sent by the government to block the publication and distribution of a book written by Bolton titled “In the Room Where It Happened” that allegedly discloses national security secrets.

Judge Royce Lamberth of the D.C. District Court, however, not ruling immediately did say…

“It certainly looks difficult to me as to what I can do about those books all over the country…The horse, as we used to say in Texas, seems to be out of the barn.”

President has publicly taken the position that any discussion with him is a national secret, and disclosing anything as a member of his administration cannot publicly reveal anything discussed with him. That didn’t win over the court and the court would not overrule Bolton’s 1st Amendment Constitutional Rights.

Wasting no time,  Lamberth released his opinion in the case brought before him by the Justice Department 10-page decision Saturday morning that the Justice Department’s arguments weren’t enough to stop the book’s release. He also cited how the book, which is scheduled to be released Tuesday, had already been widely distributed, and could easily be distributed further on the internet, even if the court said it could not be. Lamberth wrote.

“For reasons that hardly need to be stated, the Court will not order a nationwide seizure and destruction of a political memoir.”

Judge Lamberth ruling Saturday quickly dispels what amounted to an unconstitutional attempt to limit Bolton’s free speech by preventing the book’s release. The attempt brought nationwide condemnation from civil libertarians and legal scholars as being antithetical to the First Amendment.

Lamberth’s decision, however, doesn’t end the Trump Administration’s lawsuit. Attorney General Barr’s thugs at the U.S. Justice Department, which has been corrupted by a political agenda to protect the President for the first time since President Nixon’s Watergate scandal that ended with his disgrace and resignation. Trump’s Justice Department will continue with the lawsuit in an attempt to have Bolton, claw-back proceeds from the book, including from any movie and T.V. rights, and other consequences for disclosing classified information. President Trump has also repeatedly warned that John Bolton could be arrested and put on trial for disclosures in his new book.

In his new book, Bolton makes stunning accusations against his former boss President Donald Trump.  Bolton claims that Trump personally asked his Chinese counterpart, Xi Jinping, to help him win the 2020 U.S. presidential election and that he expressed support for China’s concentration camps, among other embarrassing foreign relations conversations. Bolton also confirms the fact that President Trump did attempt to blackmail Ukraine using the withholding of weapons and arms to the country to fight Russian military forces that have invaded that country.  Bolton also says Trump instigated the re-opening of an investigation into former Vice President Biden and his son Hunter so he might be able to discredit him as the 2020 election approached. The attempt led to Trump is only the second U.S. President in history to stand trial in the U.S. Senate.