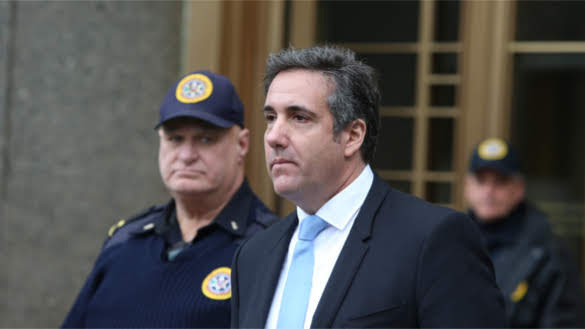 President Trump and his corrupt Attorney General William Barr suffered a devastating loss in federal court on Thursday in their attempt to stop Michael Cohen from writing his tell-all book and being interviewed by the press.

U.S. District Judge Alvin Hellerstein ruled during a hearing Thursday over the sudden re-incarceration of President Trump’s former personal lawyer Michael Cohen.  The government retaliated against Cohen and violated his First Amendment rights by taking him back into custody on July 9 after Cohen refused to stop the publication and promotion of his tell-all book that will no doubt further embarrass President Trump.

The American Civil Liberties Union and a New York law firm filed suit this past week, calling for Cohen’s immediate release, arguing that his re-incarceration amounted to retaliation for his plans to publish a book about President Trump.

Manhattan District Judge Alvin Hellerstein said he was troubled by a clause the justice department insisted on in the agreement to allow Cohen to stay out of prison that asked him to “avoid glamorizing or bringing publicity to your status as a sentenced inmate serving a custodial term in the community.”

Hellerstein went on to say…” I’ve never seen such a clause in 21 years of being a judge and sentencing people. How can I take any other inference, but that it was retaliatory?”

Federal prosecutors pushed a narrative that Cohen had been rearrested because he became “combative” after refusing to sign the agreement, and they said prison officials weren’t aware of his plans to write a book. This outright lie in the face of their demands of Cohen didn’t sit well with the Judge.

Cohen, 53, is serving a three-year sentence after pleading guilty to coordinating hush-money payments to two women, including adult film performer Stormy Daniels, who said they had extramarital affairs with Trump. The President is believed to be an unindicted co-conspirator. It’s believed that President Trump will be indicted for the payoffs to his paramours and other crimes the moment his presidency comes to an end on January 21, 2021.

Cohen’s complaint named Attorney General William Barr, Bureau of Prisons chief Michael Carvajal and James Petrucci, the warden at Cohen’s prison in Otisville, N.Y. and its believed Cohen may be able to file a civil suit against those individuals and that their conduct may be pursued as criminal offenses by the next Attorney General of the United States.