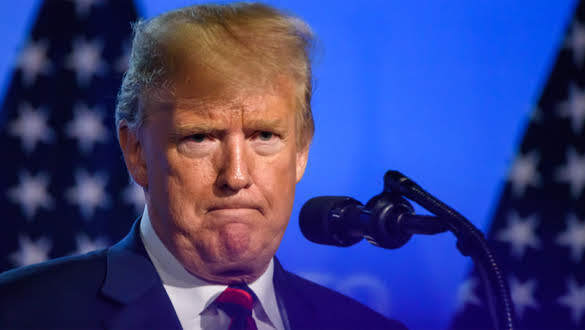 The Washington Post reports that Justice Department prosecutors are investigating former President Trump to overturn the 2020 election. Former Mike Pence's Chief of Staff and other witnesses have testified before a Grand Jury in Washington, D.C.

Former President Donald J. Trump appears not only to be under criminal investigation in Fulton Country, Georgia, by a grand jury but also by a Grand Jury in the District of Columbia. Ironically both grand juries are examining his involvement in the effort to submit lists of fake electors to former Vice President Pence from swing states won by Joe Biden.

During an interview with NBC News host Lester Holts Tuesday, Attorney General Merrick Garland made it clear that everyone, including Trump, could be indicted if the evidence supported such an action. Garland said…

"We will hold accountable anyone who was criminally responsible for attempting to interfere with the transfer, legitimate, lawful transfer of power from one administration to the next."

The seemingly never-ending release of new revelations becoming public daily is the first time a former president could be criminally charged with a series of felony charges, including obstruction of an official proceeding and conspiracy to defraud the United States.

Subscribe to WallStreetRebel.com for free, no credit card is required

This would affirm the opinion of a California judge who said earlier this year that it was more likely than not that Trump and lawyer John Eastman committed those crimes.

Congressman Jamie Raskin, a Maryland Democrat and member of the Jan. 6 Committee, said he wasn't aware of the Justice Department notifying the committee about the investigation into Trump's actions. Yet, there's no legal requirement for the DOJ to notify Congress. The standard approach is not to discuss criminal investigations.

Telling the Washington Post Rep Raskin (D-MD) about its article …

"I read that and felt a wave of relief."

According to the Washington Post, witnesses who have so far gone before the grand jury were asked hours of detailed questions about meetings Trump led in December 2020 and January 2021. Further, those witnesses that spoke to the Post said prosecutors also asked about Trump's pressure campaign on Pence and what instructions the former president gave his lawyers and advisers about the lists of fake electors.

Trump's recent stoking of his presidential ambitions at political rallies may be a strategy to frame a criminal indictment as being entirely politically based. This strategy could crumble under the weight of the evidence. The recent shift by FOX News, New York Post, and Wall Street Journal, all owned by Rupert Murdoch, away from blindly supporting Trump may be tied to this grand jury and criminal investigation. Murdoch may want to break away from the Trump cult before he and a large group of his sycophantic supporters.

One thought for investors. One or more criminal investigations and possibly indictments might not be friendly to the former president's businesses, including TruthSocial. His social media business is attempting a merger with DWAC. At its current price of $30, a share DWAC is positioned for another Donald J. Trump business implosion. We've recommended shorting 500 shares of DWAC in our WorldOpportunityInvestor.com online investment newsletter.