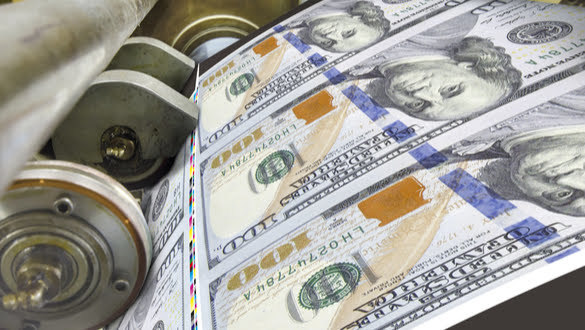 The economy’s panic and fog due to the  COVID-19 pandemic are slowly lifting as the Biden Administration has shown their vaccination rollout has resulted in more than 236,857,000 million Americans receiving one or more of their vaccinations his first 100 days in office.

For the first time since March of 2020, a Gallup poll shows a genuine positive view of the economy…

In the new Gallup poll…

“The April ratings are not the best they have been for this aspect of the index during the pandemic. In November, positive evaluations of current economic conditions exceeded negative ones by 13 percentage points -- 36% to 23%. Several other months last year, Americans’ ratings of economic conditions were similar to what they are now.”

“At their worst point during the pandemic, in late April and May 2020, negative evaluations exceeded positive assessments by 20 points.”

It’s clear that businesses are hiring at an accelerated rate as Americans increasingly venture out to shop, eat at restaurants and travel. Yes, inflation is ticking up, but mainly because the cost of gasoline has skyrocketed after the former President colluded with Saudi Arabia, Russia, and other oil-producing nations to limit the supply of oil being sold in the market.

Chair Jerome Powell, at a press conference following a meeting of the Federal Reserve, announced that the economy is far from fully recovered and needs the central bank’s continued support in the form of low borrowing costs.

Powell made clear that there are still over 8 million fewer jobs than before the pandemic struck last March. And the unemployment rate, at 6%, though well below where it was a year ago, remains elevated. He is undoubtedly focused on discouraging the workforce that has left the employment market because of various pandemic-related reasons. As schools are not yet fully open, creating child care issues for millions of families. Still, hiring is accelerating.

Powell stressed during his statement that further gains in the job market are needed to help many Americans. Especially low-income workers and people of color have been disproportionately hurt by the loss of jobs and incomes. They have yet to benefit from the early stages of recovery.

According to many economists, President Biden’s proposed $2.2 Trillion jobs bill would create 7 million new jobs during the next 3 years. That with the re-opening of schools and the elimination of most of the safety protocols by mid-June could bring back millions of discouraged workers and reduce the official unemployment rate under 5%.

According to Associated Press, Christopher Rugaber…

“The Fed’s policymakers themselves have turned more optimistic about the recovery. Last month, they significantly upgraded their forecasts for growth and inflation. They estimated that the economy will expand 6.5% this year, up sharply from their previous projection in December of 4.2%. And they raised their forecast for inflation by the end of this year from 1.8% to 2.4%.”

“So far, the economic rebound has been happening more quickly than economists forecast. In March, employers added nearly 1 million jobs — a nearly unheard of figure before the pandemic and weekly applications for unemployment aid have fallen to their lowest levels since the virus struck.”

Fears over inflation are overdone. Inflation of 2%-3% can accommodate and spur economic growth of 5% to 6% a year, especially when tossing out former President Trump’s oil industry bailout that led oil to double in price in little less than a year by artificially cutting the supply in the international market.

Former Governor of New Jersey lied on  ABC’s This Week Sunday news show implying gasoline prices are up 70 cents since Biden was elected. This is true, but it’s a result of Trump caring more about multi-billion oil producers here in the United States and around the world.