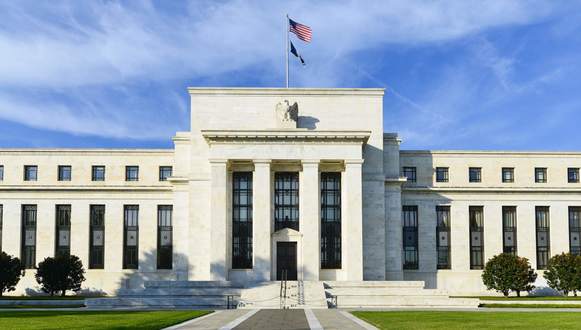 The Federal Reserve issued a statement just as stock exchanges were closing on Friday saying the financial system “amplified” the shock in March and warned that vulnerabilities remain heightened. It was a follow up warning from the central bank that more financial stimulus is needed ASAP.

President Trump and Senate Republican Majority Leader Mitch McConnell want to hold off on any additional stimulus legislation. At the same time, the Federal Reserve has now repeated its warning that without more financial stimulus, the U.S. economy will head into even deeper trouble than it is right now.

The Federal Reserve said in a new semi-annual report on Friday that the financial system had exacerbated that turmoil and warned that highly indebted businesses remained a vulnerability that could hurt the broader economy. The Fed went on to say the financial system “amplified the shock” as short-term funding markets in particular seized up in March.

The Federal Reserve warned, according to the central bank’s financial stability report, that some hedge funds were “severely affected” and “reportedly” contributed to market dislocations.

The Fed clearly sounded a warning bell about the persistent economic weaknesses that have the potential to worsen the fallout in financial markets — which it says could then spill back into the rest of the economy.

The Fed’s decision to point out that the coronavirus lockdowns will result in slow growth, spurring many more job losses, is causing consumers to pull back dramatically on spending.

The Federal Reserve points out those U.S. businesses went into this health crisis highly indebted, and as a result, they’re missing out on sales and income. A growing number of U.S. companies may default on their debts. That could have knock-on effects: Credit losses could pair with low-interest rates to hurt profitability at banks, which entered the crisis well capitalized and are, at least for now, holding up and lending steadily.

Accenting the danger was news that Long-struggling JC Penney, one of our nation’s longest-standing retail merchants, filed for bankruptcy as coronavirus crushes hopes for a quick turnaround.

Lael Brainard, a Fed governor, said in a statement accompanying the Federal Reserve’s Friday release that the Fed’s early interventions…

“…have been effective in resolving liquidity stresses, and we will be monitoring closely for solvency stresses among highly leveraged business borrowers, which could increase the longer the COVID-19 pandemic persists.”

The Fed’s latest semi-annual report gave the most detailed glimpse yet at how the central bank understands the financial gyrations that took hold as coronavirus cases began surfacing in America.

Among the areas the Federal Reserve red-flagged:

The meltdown that leads to the March 23, 2020 nose-dive on Wall Street almost brought down the market for Treasury securities — the deepest and most liquid financial market in the world. It ceased to function generally as investors were spooked by the economic risk and cashed out their holdings. The Federal Reserve report said…

·         In the Treasury market — where the Fed has bought securities at a rapid pace since mid-March to restore functioning — the difference between selling prices and buyer asking prices has declined to more normal levels, but “some measures, such as market depth, have shown only modest signs of improvement.”

Hedge funds may have worsened the panic and turmoil in the financial markets.

As investors in response to March 23, 2020, Stock Market meltdown aggressively pulled cash from money market mutual funds and the market for short-term business debt looked shaky a more surprising weakness surfaced in the market for Treasury bonds, especially older ones. Speculation has been rampant that hedge funds contributed to the turmoil. This Federal Reserve report acknowledges that as a fact in its report.

·         Some hedge funds buy and sell securities frequently to make small amounts of money that add up over a large number of trades. They are forced to sell their holdings if markets become hard to trade in, which “can lead to a rapid unraveling of market liquidity under certain circumstances.”

·         “The concentration of hedge fund leverage has increased markedly and may have to sell large amounts of assets to meet margin calls or reduce portfolio risk during periods of market stress.”

While the Federal Reserve’s intervention has calmed markets, the danger is still growing!

The Fed jumped in to ease the strains, rolling out a series of emergency lending facilities.

The reality that the U.S, corporations went into the coronavirus crisis with substantial debt loads means the U.S. economy is facing a great deal of continued vulnerability.

·         “Economic activity is contracting sharply, and the associated reduction in earnings and increase in credit needed to bridge the downturn will expand the debt burden and default risk of a highly leveraged business sector,” the report said.

·         “Widespread downgrades of bonds to speculative-grade ratings could lead investors to accelerate the sale of downgraded bonds, possibly generating market dislocation and downward price pressures in a segment of the corporate bond market known to exhibit relatively low liquidity,” it warned.

·         “Defaults on leveraged loans ticked up in February and March and are likely to continue to increase,” it said of loans to already-indebted companies.

The Federal Reserve came right out on Friday and warned that Asset prices still have room to fall.

The Fed noted that stock prices had “swung widely” at the beginning of this crisis and said other assets could be in for lower prices and stressed the need for fiscal spending to stabilize prices and to re-establish economic growth.

·         “The severe disruptions in economic activity following the outbreak could reduce house prices by bringing down household incomes and restricting access to mortgage credit,” the Federal Reserve semi-annual report said. However, a decline in supply could limit that effect.

The bottom line is if the Federal Government continues to hold back on stimulative spending, making the state budgets whole again and investing in rebuilding America’s roads, bridges, airports and initiate new construction projects the financial markets could be heading towards a financial Armageddon, worse than ever seen in modern history.

The reality of the downside danger has not escaped our attention. As a result, our sister investment newsletters have recommended shifting from long during the last few weeks as the market appears to have rallied.  And has not discounted the increasing possibility that as many as 350,000 people will have died from COVID-19 in the United States by November 3, 2020, Election Day and as many as 500,000 could die by New Year's Eve.

Remarkably, the Dow Jones and S&P rallied yesterday, while President promised that there would be an effective vaccine for the COVID-19 by the end of the year. The rally on that fiction leaves us wondering when Santa Clause, Tooth Fairy, and Peter Cotton Tail will publicly release their birth certificates to prove their existence.

The Federal Reserve’s latest report is a warning to the GOP controlled Senate and President Trump; the worst of the economic damage is ahead of us and not behind us.