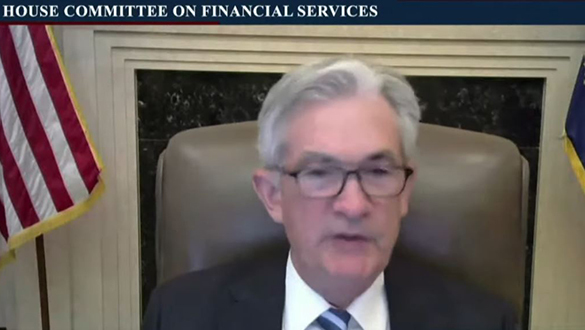 Fed Chairman Jerome Powell, testifies before the House Financial Services Committee on the state of monetary policy and digital currency.

On Wednesday, Federal Reserve Chair Jerome Powell said one of the stronger arguments for the U.S. central bank to set up a digital currency is to undercut the need for private alternatives such as cryptocurrencies and stablecoins.

The United States has reached a "critical juncture" in terms of digital currency regulation. He advocated for implementing new rules on some digital payment tools that are similar to those that apply to bank deposits and money-market mutual funds, among other things.

A significant reason cryptocurrencies such as Bitcoin have yet to gain widespread acceptance as a payment method is that their prices are volatile compared to the U.S. dollar and other government-backed currencies.

Because stablecoins are linked to the dollar, many crypto fans consider them a necessary tool for encouraging digital currencies for daily transactions, particularly in retail settings.

Those who oppose stablecoins argue that they represent major dangers to financial stability, mainly when it was discovered that some of these dollar-pegged tokens are not backed by real U.S. dollars but rather by a mix of risky assets rather than actual dollars.

Tim Swanson, the founder of the tech advisory firm Frim Post Oak Labs, wrote in January that stablecoins were "parasitic" because their operations were similar to those of non-bank financial intermediaries that provided services similar to traditional commercial banks but outside of the scope of normal banking regulation.

Powell said he agreed during a congressional hearing if having a digital currency issued by the Fed would be a more viable alternative than having multiple cryptocurrencies or stablecoins emerge in the payments system.

"I think that may be the case, and I think that's one of the arguments that are offered in favor of digital currency," Powell said during a hearing before the U.S. House of Representatives Financial Services Committee. "That, in particular, you wouldn't need stablecoins, you wouldn't need cryptocurrencies if you had a digital U.S. currency - I think that's one of the stronger arguments in its favor."

He was skeptical that crypto assets would become the primary payments vehicle in the United States but said stablecoins might gain more traction. However, he said more regulation is needed before stablecoins could take on a bigger role in the financial system.

Powell said that the Federal Reserve intends to release a study in late summer or early autumn that would outline the risks and advantages of cryptocurrencies, stablecoins, and the possibility of a Federal Reserve-backed digital currency.