Fed Chairman Powell’s Job is not in Jeopardy: White House 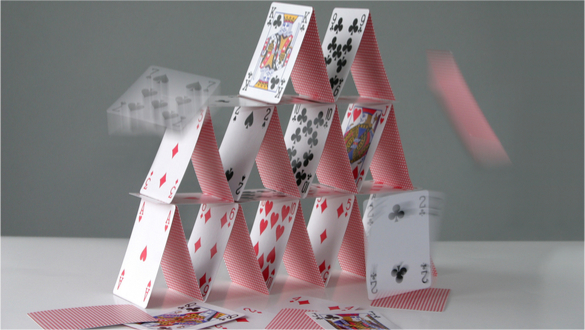 The problem is the White House said the same thing over and over again about Cabinet Secretaries only two weeks ago, and then days later President Trump fired them. The President's Cabinet has been literally a disastrously appointed House of Cards.

The Dow Jones nose-dived Christmas Eve in response to both news reports that President Trump asked his staff if he could fire Federal Reserve Chairman Jerome Powell, and Trump’s biting comments on Monday that the Federal Reserve is the U.S. economy’s only problem.

The wicked sell-off was compounded on news that Treasury Secretary Steven Mnuchin inexplicably started calling Major Banking CEO’s to assure them there were “no liquidity problems.”

These two events demonstrate the rampant incompetence of this administration. So pardon me if I am skeptical regarding the answer made today by White House economic adviser Kevin Hassett when he was asked if Powell’s job was safe and replied: "Yes, of course, 100%."

It was a nice try to calm Wall Street nerves frayed by Trump's criticism of the Fed but it like many assurances carries little weight when one soberly looks back on the more than dozen similar assurances made about members of the administration. Already, Trump has experience more resignations, firings and turnover in 2 years than President George W. Bush experienced in his eight years in Washington.

I am highly confident that the president is very happy with Secretary Mnuchin."

This on the heels of new reports that President Trump is livid with Secretary Mnuchin because he compounded the paranoia Christmas Eve and worsened the sell-off with his phone calls.

Jerome Powell was appointed in February as the U.S. central bank chief when President Trump decided his predecessor, Janet Yellen was “too short” for the job.

Legal experts say it is not clear whether Trump has the power to dismiss Powell. That won’t keep Trump from trying to fire Powell. The assurances that both Power and Mnuchin are secure in their jobs are as worthless as Trump’s promises that Mexico will pay for the bogus 550 to 900-mile wall Trump insists is worth shutting down the U.S. government and supported by many of the 800K federal employees. Just more purely larcenous rhetoric from POTUS.