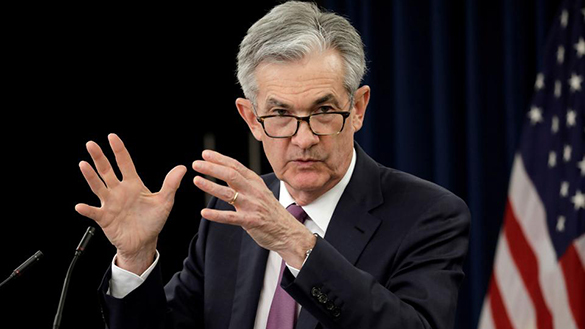 Federal Reserve Chairman Jerome Powell testifying in front of the Senate Banking Committee on Tuesday, attempted to minimize the risk of rising inflation and again pledged to keep benchmark lending rates low until jobs recover and prices have risen consistently.

During the first day of his semi-annual testimony before Congress, Federal Reserve Chairman Jay Powell said in prepared remarks he delivered to Senate Banking Committee said…

“The economic recovery remains uneven and far from complete, and the path ahead is highly uncertain. Although there has been much progress in the labor market since the spring, millions of Americans remain out of work.”

Powell went on to say the Covid-19 pandemic remains the key factor determining how quickly the world’s largest economy can recover. He expressed hope that that the vaccine rollout underway offers hope that things can return to normal quickly. He also made it clear that the Federal Reserve has the tools needed to with price increases, i.e., a resurgence of inflation.

Powell avoided direct comment on President Joe Biden’s $1.9 trillion rescue package. He did downplay the need to immediately address the $3 trillion US government deficit added since the start of the pandemic even before the addition of another $1.9 Trillion in debt that would be added if Biden’s rescue plan is approved.

Powell reassured the markets and small businesses that the Fed will keep interest rates at the current level of near-zero until the economy reaches “maximum employment and inflation has risen to 2% and is also on track to moderately exceed 2% for some time.”

“The economy is a long way from our employment and inflation goals, and it is likely to take some time for substantial further progress to be achieved.”

Powell has said the true level of joblessness is closer to 10% than the official rate of 6.3 % in January. He also stressed that while inflation is expected to pick up and will be “volatile” this year, after declines during the past year of the pandemic due to Americans beginning to spend more. At the same time, he told the Senate Banking Committee those price increases are unlikely to be large or persistent…

“We've averaged less than two percent inflation over the last 25 years. Inflation dynamics do change over time, but they don't change on a dime."

“The economic recovery remains uneven and far from complete, and the path ahead is highly uncertain. Although there has been much progress in the labor market since the spring, millions of Americans remain out of work.”

“Unemployment has come down sharply after surging last year, but the official jobless rate remains at nearly double its February 2020 level and probably understates the extent of weakness in the labor market. Likewise, consumer spending has bounced back, but the service sector remains subdued.”

Powell made it clear during his testimony he and the Federal Reserve Board of Governors will keep the key interest rate low, the central bank will continue to buy bonds. Powell said…

"At least at their current pace (of $120 billion a month) until substantial further progress has been made toward our goals."

Powell has repeatedly stressed to members of both the House and Senate that the benefits of low joblessness and unemployment benefits to reach African Americans and Hispanics who have been hardest hit by business closures caused by the pandemic.