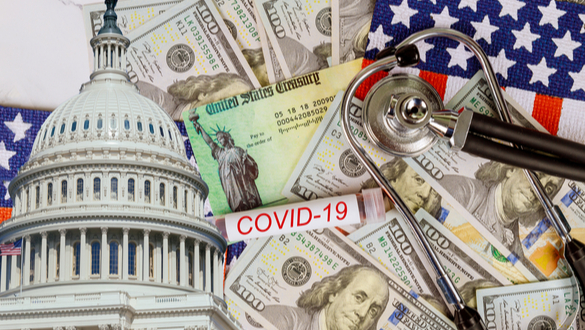 Federal Reserve Chairman Jerome Powell is optimistic about the U.S. economy bouncing back thanks to the impressive COVID-19 vaccine rollout, gathering momentum reaching as many as 4 million people on a single day over the weekend. Powell is still worried about the possibility of another surge in virus cases caused by reopening the U.S. economy too soon.

Federal Reserve Chairman Jerome Powell told CBS News 60 Minutes that he is concerned about his current concerns about the U.S. economy, including his biggest principal concern…

“That we will reopen too quickly, people will too quickly return to their old practices, and we’ll see another spike in cases.”

Powell, however, expects U.S. economic growth to be “very strong” through the second half of 2021, and his “base case” forecast expects 1 million job gains for a “string of months.” This means The Bureau of Labor Statistics last report that the U.S. economy added 916,000 non-farm payrolls in March, the fastest pace of growth since August is about to be complemented with a steady gain of 1 million new jobs steadily over the balance of 2021. This assumes that another devastating wave of Covid-19 doesn’t derail the momentum.

Powell went on during his 60 minutes interview to say…

“There are still 8.5 million to 9 million people still out of work now compared to February of last year.”

According to Powell, the Federal Reserve will continue to hold the line on its easy money policy (low-interest rates) until the economy appears to be at maximum employment.

The Fed’s current targets for short-term interest rates remain at near zero due to the pandemic. Powell went on to say…

“I think it’s highly unlikely we would raise rates anything like this year,”

Powell’s concern of a fourth wave derailing the economic bounce back in the United States economy was reinforced by his emphasis on social distancing, wearing masks to avoid another spike in Covid-19 cases.

“I would identify the principal risk to our economy right now really is that the disease would spread again more quickly,”

During the CBS News interview, Powell assured that the U.S. banking system has held up well throughout the pandemic, point8ing out that risks of a repeat of the 2008- systemic breakdown currently appear “very, very low.”

Powell recognized the fallout from the Archegos family office’s implosion, which led several large international banks to lose billions but insisted he and other officials at the Federal Reserve are “monitoring” the fallout.  Insisted the incident appears to have been a risk management breakdown at one firm, as opposed to system-wide issues...

“This incident doesn’t really raise questions about the stability of the financial system or of those institutions, which are mostly foreign banks,”

Broadly, Powell said asset prices appear “elevated by some historical metrics” but said the financial system should prove resilient even if the stock market experienced some significant market correction.

During the 60 Minutes interview, Powell offered no concerns that the Federal Reserve will have any problem holding the line longer on low rates and will have any problem continuing its aggressive asset purchases. He expressed his continued commitment to focusing on bringing jobs back to pre-pandemic levels…

“I’m highly confident we’ll come through this — with a better and more inclusive economy.”