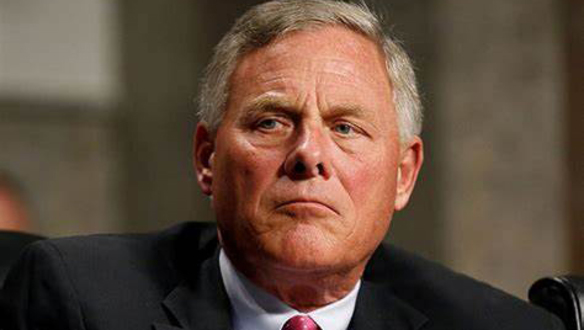 FBI agents investigating Sen. Richard Burr (R-NC) over his mass sell-off of stocks obtained a search warrant and served it on the U.S. Senator’s legal representation. The FBI went to his home, and the Senator handed the FBI agents the phone. He then stepped down as the House Intelligence Committee.

Fiercely independent Richard Burr, who has been a constant thorn in President Trump Russian scandal, was served with a federal lawsuit. In late March, Sen. Burr suspiciously sold off personal stock positions just before the March 23, 2020 stock market crash caused by the coronavirus pandemic.

Burr is accused of dumping between $582,029 and $1.56 million, according to ProPublica reported in a March expose. Burr has repeatedly and strenuously denied any wrongdoing. At this point, we know the following…

“Understanding the assumption many could make in hindsight, however, I spoke this morning with the chairman of the Senate Ethics Committee and asked him to open a complete review of the matter with full transparency.”

Senator Burr’s explanation of how the information he used to decide to sell his stock holds came from watching CNBC is facing a great deal of skepticism from Senators of both parties. Hurting his credibility in this matter is the fact that in 2012, Senator Burr was one of three senators to oppose a bill that would explicitly bar Congress members and their staff from using non-public information for personal benefit, including stock-trading.

Burr may be forced not only from his Senate Intelligence Chairmanship but may be forced to resign from the senate. He has already decided not to seek re-election. His resignation by North Carolina law would require the appointment of a Republican to the seat by the Democratic Governor of North Carolina.

If Burr resigns, look for the appointed replacement to be a Republican in name only, a virulent never Trumper or such an incompetent “deplorable” that he does nothing but embarrass North Carolina. A special election depending on the timing of the election, could seat a Democrat. Republican Senator Tom Tillis of North Carolina is polling up to 13 points behind his 2020 opponent.  There’s an increasing possibility that two Democrat Senators could be representing North Carolina in Washington sometime in 2021, changing the southern States’ political landscape and the balance of power in the U.S. Senate.