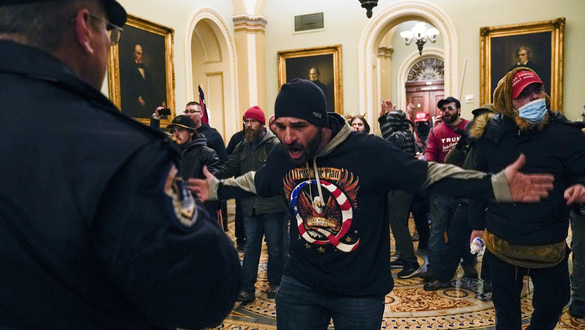 Director of the Federal Bureau of Investigation Christopher Ray warned Congress that domestic terrorism was a much more severe problem than foreign terrorism. He now warns of a massive spike of 2000 cases being opened in the wake of January’s pro-Trump riot at the U.S. Capitol.

“We have significantly grown the number of investigations and arrests.”

Wray testified this past September that the number of such cases was about 1,000. At the end of 2020, there have been approximately 1,400 such cases, and after January 6, that figure has ballooned again, he says.

During today’s testimony in front of the Senate Judiciary Committee, Wray defended the bureau’s handling of intelligence in advance of the attack on the Capitol on January 6, 2021. Insisting the FBI agents rapidly shared intelligence with other law enforcement agencies. He did concede that FBI officials will review internal practices because even with the heads-up given to all those involved in law enforcement in Washington D.C,  January 6 there was anything but an “acceptable result.”

FBI Director Wray’s testimony before the U.S. Senate  Judiciary Committee is the latest in a series of Congressional hearings that are supposed to examine security and intelligence failures leading up to the January  6, 2021 riot and what the federal government intends to do to counter the growing threat of violence from domestic extremists.

On Wednesday, FBI and military officials are scheduled to testify before another panel looking into the events of that day.

Senate Committee Chairman Sen. Richard J. Durbin (D-IL) questioned FBI Director Wray on how the bureau shared a situation report, prepared by the FBI’s Norfolk field office a day before the riot, which warned of specific appeals for violence — including a call for “war” at the Capitol.

At a hearing last week, the D.C. acting police chief and the former Capitol police chief conceded their agencies had received the warning but suggested the FBI should have more aggressively sounded the alarm. D.C. Police Chief Robert J. Contee III told lawmakers.

“I would certainly think that something as violent as an insurrection at the Capitol would warrant a phone call or something.”

#1: By email to the FBI’s Joint Terrorism Task Force, which includes both the D.C. and Capitol Police;

#2: It was posted on a law enforcement web portal;

#3: It was mentioned in a command center briefing in D.C.

After the Senate Judiciary meeting, some observers concluded Wray intentionally avoided specifically addressing why no one had at the FBI phoned the D.C. police chief to let him know that he had been left out of the briefing of the information before January 6. No excuse was offered. The question hung in the air.

Wray looked and sounded at times as if he suspects his resignation will be demanded by one or more Senators. He attempted to excuse the FBI’s lack of preparation by insisting that he believed the report was handled according to standard FBI practice.

The FBI’s warning, which was first reported by The Washington Post on January 12,  has yet to be shared with lawmakers. It warned of social media chatter that supporters of then-President Donald Trump were talking about creating a perimeter around the U.S. Capitol and storming inside in a bid to halt Congress’s certification of his election loss to Democrat Joe Biden.

The FBI warning reported by The Washington Post on January 12 included a quote showing one person urging Trump supporters to go to Washington “ready to fight.”

Congress, the warning quoted another protester in the lead up to the January 6th insurrection as saying…

“needs to hear glass breaking, doors being kicked in, and blood from their BLM and Pantifa slave soldiers being spilled. Get violent. Stop calling this a march, or rally, or a protest. Go there, ready for war. We get our President, or we die. NOTHING else will achieve this goal.”

Many of the senators, including those on the Senate Judiciary Committee today, seemed sympathetic to the difficulty of preventing acts of domestic terrorism before they occur. Still, several found Wray’s answers unconvincing and at times, Wray appeared shaken.

FBI Director Wray stuck a pin in Sen. Ron Johnson’s (R-WI) right-wing conspiracy theories about the January 6 attack by making it clear to the Senators Tuesday that the “lethal violence” of radical right-wingers are behind “racially-motivated violent extremism” that Americans are now facing.

During the hearing, Senator Johnson asked Director Wray about reports that Antifa was behind the January 6 insurrection. Wray destroyed the conspiracy theory by making it clear, there has been zero evidence to support Johnson’s Antifa conspiracy nonsense.

MSNBC’s Nicolle Wallace referring to the Wisconsin lawmaker as “RonAnon,” a play on QAnon, said Wray debunked the desperate GOP theory that “fantasy dress-up Trump supporters” were behind the militias.

Wray was very clear on this Antifa conspiracy nonsense…

“We see quite a number, as we’re building out the cases on the individuals we’ve arrested for the violence, quite a number what we would call militia violent extremists. So, self-identify with the Proud Boys or Oath Keepers. Things like that. We also have a couple of instances where we’ve already identified individuals involved in the criminal behavior who we would put in the racially motivated, violent extremists who advocate for what you would call white supremacy. So, there have been some of those individuals as well.”

“Based on your investigation so far, do you have any evidence that the Capitol attack was organized by ‘fake Trump protesters?”

“We have not seen evidence of that at this stage.”

“Understand in your testimony, previously, that you did not see Antifa or groups playing a significant role in the January 6th insurrection?”

“While we’re equal opportunity and looking for violent extremism of any ideology, we have not, to date, seen any evidence of anarchists, violent extremists, or Antifa connected with the 6th.”