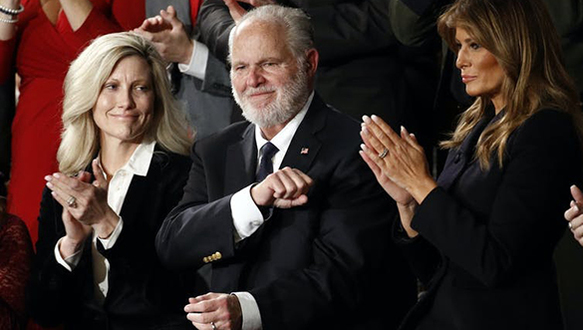 Former Senator Al Franken said it best when he wrote his 1996 bestselling book Rush Limbaugh is a Big Fat Idiot and Other Observations.

Even back then, with that book title, Franken couldn’t imagine the insanity and the massive number of lies Limbaugh would spread from then until now. Today, his lying, racist, truth-deprived radio show comes to an end after his lung cancer battle came to end.

Fox News reports that Limbaugh’s death was announced by his fourth wife, Kathryn Limbaugh, during his radio show. She made the announcement about his death by saying…

“For over 32 years, he has cherished you, his loyal audience, and always looked forward to every single show,” she said. “It is with profound sadness I must share with you directly that our beloved Rush, my wonderful husband, passed away this morning due to complications from lung cancer.”

Limbaugh rose to prominence on the hateful rhetoric during the 1990s when he grew popular for his fact-free attacks on then-President Bill Clinton, going so far as to call then-12-year-old first daughter Chelsea Clinton the “White House Dog.”

This was a man who celebrated and thrived on hatred and attacked many innocent people, including Chelsea Clinton, the Newtown elementary school children, and the mass murder spree victims on February 14, 2018, which took place at Marjory Stoneman Douglas High School in Parkland, Florida.

He never met right-wing lies that he wouldn’t repeat and pound over and over again if it meant high ratings from an audience that always ate up his lies and rarely ever questions his truthfulness.

In April 2006, Rush Limbaugh was arrested on prescription drug fraud charges in his home state of Florida, following years of addiction to painkillers (prosecutors later agreed to drop all charges if he agreed to enter rehab). Many felt he received special consideration because of his political influence.

In March of 2008, he again showed his racist views when he chuckled when a caller compared then-presidential candidate Barack Obama to Curious George, a cartoon monkey.  Limbaugh apologized to Obama later on and insisted he’d never heard of the well-known children’s cartoon character – a blatant lie. In the years leading up to Trump’s winning the presidency, he entertained the lies that Obama had been born in Kenya.

Just four days before Barrack Obama’s inauguration, Limbaugh urged Republicans not to work with the incoming president and declared on-air, “I hope he fails.” This set the stage for eight years of fervent Obama criticism (at one point in 2010, he threatened to flee the country and move to Costa Rica if Obama’s healthcare reform efforts passed).

In February of 2012, Limbaugh called Georgetown law student Sandra Fluke a “slut” and a “prostitute” after publicly advocating for universal contraception coverage. This drew nationwide outrage and causing dozens of advertisers and a few radio stations to drop his show (Limbaugh later apologized for his choice of words).

Despite declaring that “conservatism lost” when Donald Trump won the Republican primary in 2016, though he quickly pivoted to supporting Trump during his presidency without any qualification realizing Trump’s populist white supremacist audience was, in fact, his audience. He was rewarded for his support by former President Donald Trump, who would give the right-wing host the “Medal of Freedom” during his final State of the Union address last year.

Limbaugh was first diagnosed with Stage IV lung cancer in January 2020. He would continue broadcasting up until the first week of February 2021. For one, I will not miss him.