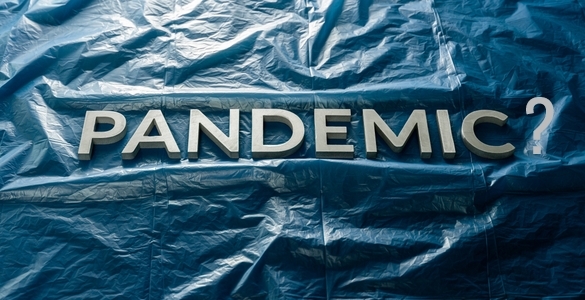 With the announcement on Saturday by the Chinese government that there were 45 more deaths,  bringing the total number of infections to 14,380 and 304 deaths, the rapidity rising caseloads are alarming researchers, who are openly fearful the Coronavirus may make its way around the globe. Their fear is being fueled by the fact that scientists are still unable to predict how many infections will occur and how many deaths may result because of incomplete testing results.

Stock markets around the world are likely to be confronted with the reality Monday morning that the Wuhan Coronavirus is spreading so rapidly in and outside China that it’s more and more likely to become a pandemic that encircles the entire globe, according to many of the world’s leading infectious disease experts.

The realization that Coronavirus is likely to become a pandemic. An ongoing epidemic on two, three or even four continents despite the extraordinary travel restrictions and quarantines now imposed by China and other countries, including the United States. The virus is going to make a dramatic impact on the world economy.

Dr. Michael Ryan, head of emergency responses for the World Health Organization, was quoted during an interview with STAT News yesterday that there was…

“…evidence to suggest this virus can still be contained” and that the world needed to “keep trying.”

Ryan’s optimism is foreshadowed by the realization that scientists have had more than 30 days to examine the virus and they still do not know how lethal this new form of the Coronavirus is and how much damage a pandemic might cause. What we do know is the pathogen is readily transmitted between humans. The Coronavirus is spreading more like influenza, which is highly transmissible, unlike its slow-moving viral cousins, SARS and MERS.

Dr. Anthony S. Fauci, director of the National Institute of Allergy and Infectious Disease, was quoted on Sunday as saying …

“It’s very, very transmissible, and it almost certainly is going to be a pandemic,”

“But will it be catastrophic? I don’t know.”

In just the last three weeks, the number of lab-confirmed cases has soared from about 50 in China to 14,000 in 23 countries; there have been over 300 deaths, all but one in China. The problem that most virologists tracking this virus have is they can’t rely on the numbers of cases being reported. In China alone, over 60 million people have been quarantined and test kits are becoming increasingly short in supply. We could already be looking at as many as 190,000 people, even more being infected. After all, various epidemiological models estimate that the real number of cases is 100,000 or even more.

One good indication is the expansion even if it’s at 100,000 at this point means that the virus is not spreading as fast as that of flu or measles. Still, the Coronavirus is spreading much faster than virologists saw when SARS and MERS epidemics began.

In July 2003, after spreading for nine months and being brought to an end, only 8,098 cases had been confirmed. MERS has been circulating since 2012, but there have been only about 2,500 known cases.

Not knowing how many people actually have the virus or will be affected creates statistical anomalies with extrapolating future cases and projected deaths. The current estimate being used by researchers is based on the SARS virus that killed about 10% of those who got it, and MERS now kills about 33% of those infected.

By contrast, the “Spanish flu” epidemic of 1918 killed only about 2.5% of its victims, but because it infected so many people 100+ years ago and medical care was so much less effective, it killed an estimated 50 million people globally.

Another highly transmissible virus, the H1N1 “swine flu” pandemic of 2009, killed approximately 285,000, fewer than seasonal flu normally does each year, which adds up to a fatality rate of just .02%.

So far, the official mortality rate for known cases of the Wuhan Coronavirus has been running about 2%. Researchers hope that as more tests are done, and more mild cases are found that the death rate will fall below 2%.

It’s important to recognize that an accurate estimate of the virus’s lethality will not be possible until many more studies can be completed. Many more blood tests must be completed so scientists can measure how many people have antibodies. This will allow a study on household to determine how often family members are infected when another member of a family is infected. Researchers also need more comprehensive genetic sequencing to determine whether some strains of the Coronavirus are more dangerous and lethal than others.

Other important unknowns at this point include who is most at risk, whether coughing or contaminated surfaces are more likely to transmit the virus, how fast the virus can mutate and whether the Coronavirus will die out as we approach the warmer weather of spring, now about 60 days ahead.

Another reality people must consider is the testing accuracy and reporting of people being infected or not infected in China. Chinese laboratories have been overwhelmed. Chinese state media has reported test kit shortages and processing bottlenecks are occurring throughout the country and this presents the danger that current estimates are base on systemic undercount of those infected with the virus.