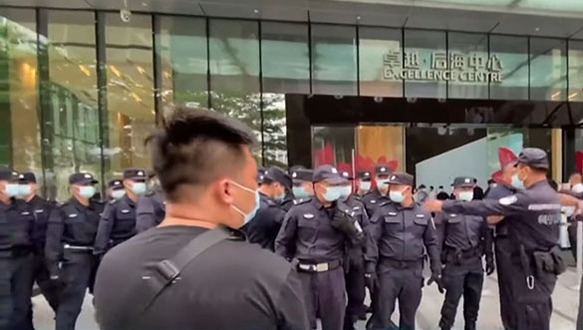 China's real estate market is a multi-trillion-dollar mess that may lead to a massive debt crisis and mob unrest. China Evergrande Group has hired advisors to investigate its financial alternatives, and the company's price has plummeted due to the warning.

It is possible that China Evergrande could collapse dramatically, with far-reaching repercussions, or that the government would intervene and provide a bailout to the company, which was once the country's top-selling property developer.

The real estate giant has made attempts to acquire the funds necessary to pay lenders and suppliers, with authorities and financial markets worried that any crisis might echo through China's banking system and potentially ignite wider social unrest.

In 1996, Evergrande was established in Guangzhou and epitomized China's carefree era of borrowing and building. However, with liabilities of over two trillion yuan ($305 billion), the company's possible collapse is one of the country's largest in recent history.

As national sales growth has slowed in recent years, Evergrande has expanded into non-real estate sectors like electric cars, football, insurance, and bottled water to diversify its revenue streams.

In June, Evergrande admitted that it had failed to pay some commercial paper on time, and a Chinese court, acting on the request of Guangfa Bank, froze a $20 million bank deposit held by the firm in July. This raised more concerns.

Hundreds of new rules, including debt and land acquisition limits, have been imposed on Chinese developers in recent years as part of an attempt to minimize financial risks while also encouraging the construction of affordable homes.

After authorities imposed debt-reduction restrictions in 2020, Evergrande increased its debt-reduction efforts. Although the company does not have any significant offshore bond maturities until early next year, late payments to suppliers and interest on loans have risen to the surface, raising concerns that have long plagued investors.

It expects to meet all of the requirements by the end of the calendar year next year.

Evergrande has given substantial discounts on its residential projects to increase cash flow, and the company has also sold the bulk of its commercial properties.

During the second half of 2020, the company will undertake a $555 million secondary share sale, generate $1.8 billion via the listing of its property management business in Hong Kong, and sell a $3.4 billion investment to new investors.

Evergrande can now not pay suppliers, finish projects, or generate income due to a lack of fresh funding, prompting the company to hire advisors and issue a default warning to creditors.

Optional buyouts, break-ups, and bailouts are among the alternatives being explored at the moment.

While experts have downplayed the similarities to the 2008 collapse of the U.S. investment bank Lehman Brothers, which caused difficulties at counterparties and ultimately froze global markets, some investors are worried about the possibility of a repeat of that situation.

According to Michel Lowy of SC Lowy, a banking and asset management firm that specializes in distressed and high-yield debt, "If Evergrande defaults on its debt and goes through restructuring, I don't see how it might be controlled."

In addition to Lowy, "there are other developers that are dealing with the same problem of a lack of funds and have overextended themselves."

Another source of worry is the fragility of banks and the government's determination to push through reforms to the property market despite warnings of severe ramifications.

Evergrande's stock has dropped by almost 90 percent in the past 14 months, while its dollar notes are trading at a discount of 60-70 percent to their face value.

In the words of Natixis analyst Alicia Garcia Herrero, "the most obvious grey rhino in China is the real estate sector."

The greatest immediate concern is a collapse in the real estate market rather than a financial catastrophe on the scale of Lehman Brothers.

A fire sale at Evergrande may cause prices to plummet, causing indebted developers to go bankrupt and harming a sector that contributes for a fifth of China's gross domestic product.

Mr. Patrick Perret-Green, a London-based independent expert, described Lehman as "very unique" in that it "washed across the financial sector, effectively shutting down operations."

"There were millions of contracts with a plethora of counterparties, and everyone was assessing their risk," he said.

"Because of Evergrande, the whole real estate sector is in shambles."

There is also significant bank risk, as shown by a leaked 2020 document that Evergrande rejected as a fabrication but experts deemed genuine. The paper disclosed liabilities that extended over 121 non-banking companies as well as more than 128 banks.

Non-performing loans at commercial banks, on the other hand, were a manageable 1.76 percent of total loans in the third quarter, and China has much more control over its financial system than the United States.

The authorities' attempts to decrease developers' debts also raise the likelihood of a property liquidation in the future.

Evergrande's chances of survival are in question, according to James Shi, a distressed debt analyst at credit analytics company Reorg. "The government has worked hard to encourage de-leveraging in the bloated real estate sector, so providing Evergrande a lifeline now seems unlikely," Shi said.

Because many financial institutions have direct and indirect exposure to Evergrande via different financial instruments, late payments may result in cross-defaults.

According to DBS, Evergrande is responsible for 4 percent of the high-yield Chinese real estate bonds traded on the dollar bond market.

Defaults will also trigger a sell-off in the high-yield credit market, which will exacerbate the situation.

The collapse of Evergrande will have a major impact on the labor market. The company employs 200,000 people and hires 3.8 million people for project development each year.

With about one hundred furious protestors assaulting Evergrande's headquarters on Tuesday, analysts are increasingly expecting a controlled collapse to protect smaller investors. Bondholders, meantime, are taking a blow as a result of the crisis.

According to Nomura analyst Iris Chen in a client note, "we do not believe the government has a financial incentive to bail out Evergrande (a privately owned firm)."

On the other hand, the company will not forcefully push Evergrande down and, in our view, will supervise a more orderly default if there is one.

Obtaining buyers for Evergrande's assets is essential if the company is to recoup any of its losses. However, this has been difficult since potential saviors seem prepared to wait for more difficulties.

According to a stock market announcement issued on Tuesday, Evergrande has said that it has been unable to complete the sale of its Hong Kong office building "within the expected period."