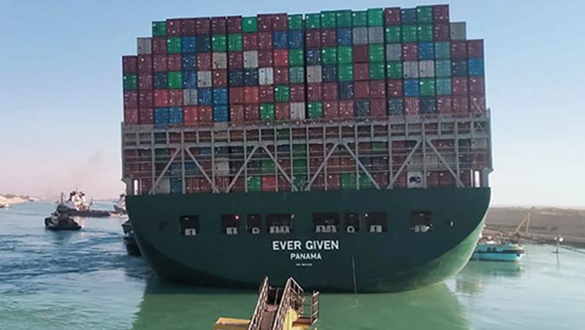 The Suez Canal blockage caused vessels to be backed up in the Mediterranean to the north and the Red Sea to the south is again open.

Thanks to a supermoon, the Ever Given, a mega-ship the size of the Empire State Building that had been blocking the Suez Canal, has been refloated and pushed down the canel. According to officials, rescuers safely rescued the front end of the monster freight boat after pushing the rear end.

The Ever Givens ran aground while transiting the Suez Canal on March 23, lodging herself against both banks.

Earlier today, satellite data revealed that the Ever Given had been straightened after its rear end was shifted due to high tides caused by a supermoon.

According to canal officials, the skyscraper-sized boat had been turned “80 percent towards the right direction” after the stern was relocated with “pulling maneuvers” that moved it 335 feet from the bank.

The mega-ship was towed to the canal’s center and into Great Bitter Bay, a vast body of water halfway between the canal’s north and south ends.

The ship will be subjected to a technical inspection until it arrives, according to officials.

The ship was rescued, according to Peter Berdowski, CEO of the Dutch company Boskalis, which participated in the rescue operation.

He said, “I am pleased to inform you that our team of experts, working together with the Suez Canal Authority, were able to achieve results."

The Ever Given was refloated on March 29 at 15:05 hrs local time, restoring free passage through the Suez Canal.

“I am immensely proud of the excellent work performed by the on-site team as well as the many SMIT Salvage and Boskalis colleagues back home to accomplish this difficult operation under the watchful eye of the planet.

“The time crunch to finish this operation was obvious and unprecedented, and the outcome is a true demonstration of our unique skills as a dredging and maritime services provider.”

With Ever Given being refloated, it is estimated clearing the backlog of vessels would take at least 10 days, according to data firm Refinitiv.

Last Tuesday, the 400m-long Ever Given got wedged in the shipping lane owing to adverse weather conditions, halting $8.94 billion in global trade.

Rescue teams used tug boats and drilling to free the yacht, despite critics warning that the monster vessel might be too large for such an activity.

Berdowski explained that the rescue team used high-pressure water jets to dredge under the vessel’s bow to free the ship from the clay.

Eleven tugboats were supported by many diggers that vacuumed up sand under at high tide caused by a “supermoon.” According to canal management company Leth Agencies, the full moon increases the water volume owing to the magnetic force on the planet.

Berdowski said this morning that freeing the front end was not a “piece of cake,” but the tug boats were able to haul the mammoth boat across the clay of the canal bank.

The Suez Canal transports about 15% of the world’s shipping traffic - approximately 19,000 ships last year - and is a significant source of foreign currency revenue for Egypt.

At least 369 boats, including hundreds of cargo ships, bulk carriers, and oil and gas tankers, were awaiting passage through the canal.

Few ships opted to reroute their cargoes across the Cape of Good Hope, which added almost two weeks to journeys and raised fuel costs.

Brent oil dropped $1 a barrel to $63.67 on reports that the ship had been refloated.

Several dredgers operated overnight to clear 27,000 cubic meters of sand and mud from around the 200,000-tonne ship.

Another strong tugboat, the Italian-flagged Carlo Magno, arrived on Monday, and the flotilla will now concentrate its attention on the ship’s prow, according to Berdowski.

An official for the ship’s maker, Shoei Kisen, said it was unclear if the Panama-flagged, owned by Shoei Kisen Kaisha (a subsidiary of Imabari Shipbuilding) and time chartered and operated by Taiwanese container line Evergreen Marine would need to go to a port for repairs.

The ship owners did not have a timetable for reopening the critical channel, which transports 7% of the world’s crude.

Hundreds of millions of oil and liquefied natural gas barrels travel across the Persian Gulf’s artery on their journey to Europe and North America.

Goods manufactured in China, such as chairs, food, and grocery staples, must travel through the canal or take a detour across Africa.

The unexpected closure has continued to interrupt oil and gas exports from the Middle East to Europe, raising concerns about prolonged delays, product shortages, and increasing consumer prices.

High winds are thought to have swept the boat en route from China to the Netherlands through the small canal that connects Africa and the Sinai Peninsula.

According to Refinitiv, Egypt has already lost more than $95 million in sales due to the termination of canal transits.

According to sources, the ship, its master, passengers, and Egyptian officials who boarded the vessel in the canal are all under investigation.

Shoei Kisen has apologized for the accident and confirmed that every attempt is being made to free the stranded ferry.

Egypt’s authorities were investigating the accident and claimed strong winds were most definitely a cause.

Suez Canal reopens as Ever Given successfully removed