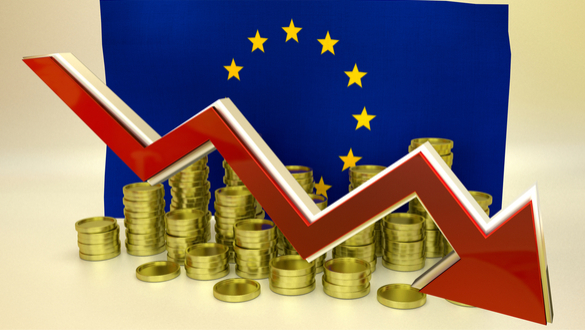 Europe’s economy is growing at the lowest level since 2013, European Central Bank ECB cuts its forecast for 2019 to a growth rate of 1.1%. No sign of Trump’s trade war against the EU coming to an end.

European Central Bank (ECB) President Mario Draghi announced a of European economy all the way down to 1.1%, more than a half a point lower than it estimated growth just three months ago. The reduction in growth estimates is prompting Draghi and the ECB to launch a new package of assistance that includes new lines of credit for banks to a more extended pledge to maintain record-low interest rates as a new stimulus effort.

This latest effort by the EEU to shore up the weakening economy is the most significant effort since its quantitative-easing program four years ago. Draghi told journalists in Frankfurt on Thursday during a question and answer period…

“The persistence of uncertainties related to geopolitical factors, the threat of protectionism and vulnerabilities in emerging markets appears to be leaving marks on economic sentiment. The risks surrounding the euro area growth outlook are still tilted to the downside.”

Despite Draghi’s effort to stimulate the ECB’s gloomy economic forecasts economists around the world are concerned with the ECB has very limited ammunition. The EEU is export dependent and is being seriously hurt by trade tensions with President Trump, and a worse than reported slowdown in China as well as the uncertainties surrounding Brexit.

Despite all the bad news, Draghi said yesterday…

“Officials expressed confidence that the economy would follow the path outlined in the updated forecasts and consider the probability of a recession in the 19-nation bloc as “being very low.”

The Italians are citing growing wages, an improving labor market, and consumption that remain “by and large in good shape.”

While Draghi said that the package of measures was agreed unanimously on conducting an ECB’s policy stance that’s more accommodative and will, as a result, increase the region’s economic resilience. Draghi went on to warn there are things out of the ECB policymakers control…

“Policymakers can’t solve problems related to protectionism and Brexit, he said. Thursday’s meeting was their last before the U.K. is set to leave the European Union on March 29.”

While many economists were expecting Draghi and the ECB would act, a clear singe that the level of concern among Governing Council members of the ECB, that’s been echoed across other financial and government economically concerned institutions, as well as other central banks recently.

The Bank of Canada announced its concern about the “increased uncertainty” about the timing of its future rate increases, While New York Federal Reserve President John Williams said the U.S. Federal Reserve could afford to be patient about deciding its next move. According to Draghi...

“The fact that the climate has become more uncertain doesn’t mean one has to stay put -- you do what you think is right. In a dark room you move with tiny steps. You don’t run, but you do move.”

Bloomberg economists Jamie Murray and David Powell, economists, have taken the position that …

“The Governing Council’s decision today shows it’s taking the slowdown in the euro-area economy seriously...Assuming no big shock from trade policy, Brexit or a re-escalation of tension between Rome and Brussels, conditions should be right for the first rate hike in March 2020.”