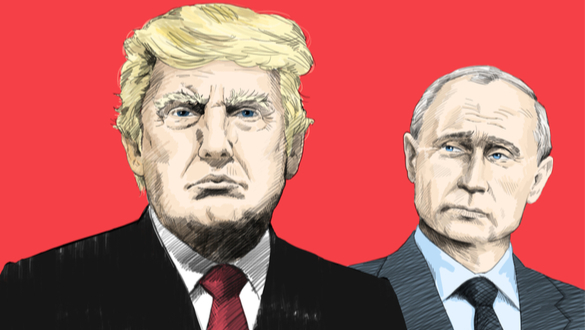 Vladimir Putin vengeance for the collapse of the Soviet Empire is hidden behind Europe’s decision to join with China to work around Trump’s sanctions against Iran. Buy gold; Trump is creating a global economic storm that will make 2008-09 look like a walk in the park. Ironically, even Russia will suffer.

Our country had had tremendous diplomatic power the last 74 years because we have been able to count on our post World War II global alliance that could be relied upon to stand up for our common interests to prevent war, promote democracy and freedom.

Trump’s foreign policy of bullying, threatening military consequences, punitive tariffs and sanctions are making our country look like it’s being governed by a corrupt and incompetent, want to be crime boss with a fetish for extortion.

The decision on Friday by Europe and China to ignore and flaunt U.S. sanctions has convinced Iran to remain committed to the multi-national nuclear treaty that the United States has walked away. Iran had been vowing; if it did not start to receive financial gain from the nuclear deal, it would breach its limits on enriched uranium.

The Trump Administration immediately let it be known that European companies have a choice: Do business with the United States or do business with Iran, as Europe announced that a new system to allow trade with Tehran was in place. Trump, however, didn’t threaten China, saying only, it will continue to sanctions on Iranian imports of oil and was looking into reports of Iranian crude going to China.

The Trump administration's isolation on the world stage is now staggering. ‘Deranged Donald’ threats to attack Iran, waging a cyber war against it, and doing everything he can do to financially cripple Iran, attempting to extort it back to the negotiating table for a better deal is failing.

You have to give President Trump credit. He’s by far the most corrupt, intellectually deficient, and most transparent con-man in history. He’s a worthy inspiration for new Marvel supervillain.

After all, Trump is accused rapist, serial adulterer, confirmed child abuser, a crooked businessman who caps of his evil persona off with being mentally deranged, pathological lying narcissist. Such evil, he would have children tortured only to enjoy telling anyone one to hear its Obama’s fault.

The irony of all this extortion is Trump supporters are paying the billions in the import taxes, under the disguise of being tariffs being collected from China and our other trading partners.

Behind all of this is Putin, laughing. He’s maneuvered the United States into abandoning its allies, waging war on the free press, and to impose sanctions and tariffs on its allies and now threatening any businesses in those countries doing business with Iran. This will end the post World War II world alliance.

The decision by Europe to honor its nuclear treaty with Iran will be a major shock wave to the global economy. It will lead to the end of the new talks on trade just agreed to with China and to a wave of currency devaluations, and a global financial crisis.

Trump made it clear that he thinks he can default on the national debt and order the printing of limitless amounts of money. He has theorized openly that by the time the bill comes due he’ll be long gone.

Republican strategist Rick Wilson’s book is aptly titled Everything Trump Touches Dies: A Republican Strategist Gets Real About the Worst President Ever.

Buy gold; the Trump is a determined extortionist will global bring misery to billions of people, including to his supporters. Ironically, Russia will suffer too.