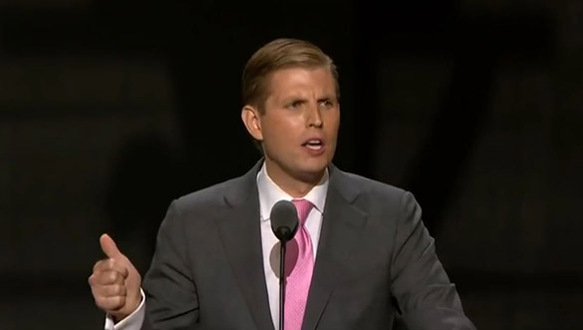 Newly released court documents show that when Eric Trump was deposed by lawyers working for New York Attorney General Letitia James' probe of the Trump Organization, he spent six hours invoking his 5th Amendment right not to incriminate himself more than 500 times.

One of the most important rights of every United States citizen and non-citizens is not to incriminate themselves when questioned by any law enforcement officer. We all have that right in a traffic stop when being prosecuted in court or even during a deposition.

Eric Trump, the son of former President Donald J. Trump, while being deposed about the Trump Organization on October 5, 2020, for 6 hours, invoked his 5th Amendment rights more than 500 times.

According to screen captures of the court documents revealed by Luppe B. Luppen, former President's oldest son, first waged a legal battle not to give the October 5, 2020 deposition. When that failed, he was then forced by a court to appear for the deposition. He refused to answer any questions about the Trump Organization out of fear that it would incriminate him.

Now the former President of the United States, his oldest daughter Ivanka Trump and his youngest son from his first marriage Donald Trump Jr., have been subpoenaed for depositions involving the family business and are fighting in court to avoid being deposed by the office of New York State, Attorney General Letitia.

In a pictured court petition designed to fight off the NYAG's subpoena for their depositions, the lawyers for Ivanka, Donald Jr and former president lawyers argue that…

"Given the public litigation between Mr. Trump and DANY, the public reporting on the DANY investigation and the multiple disclosures from OAG, there is no risk that any witness, much less these Respondents, would appear for civil testimony without being aware of the possibility of criminal liability,"

"In fact, as evidence of that knowledge, two Trump Organization witnesses invoked their Fifth Amendment privilege against self-incrimination more than a year ago: Eric Trump and Allen Weisselberg," the documents continue."

The petition filed on behalf of Donald, Ivanka and Donald Jr reveals that…

"During his examination on Oct. 5, 2020, when asked a question that went beyond basic background information, Eric Trump delivered extended prepared remarks objecting to the investigation and invoking his right against self-incrimination."

The Fifth Amendment right against self-incrimination allows anyone to refuse to answer a question to avoid implicating or accidentally confessing to a crime.

Read relevant court filings below as well as the full case by clicking here.