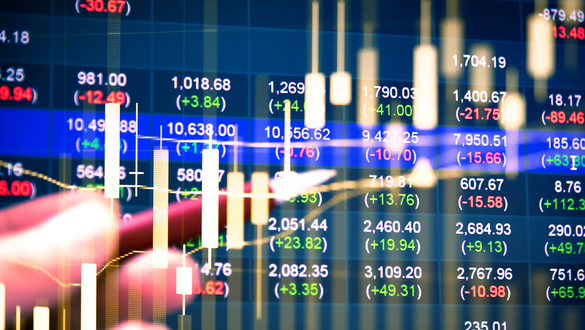 Three U.S. stock analysts at Deutsche Bank AG warned that investors are overloaded on equities and over anticipating economic growth and earnings and that U.S. stocks are likely to suffer through a flat 2020.

Deutsche Bank AG equity strategists Parag Thatte, Srineel Jalagani, and Binky Chadha wrote in a note to the firm’s clients and international network of employees that...

“Equity positioning, like the market itself, has run far ahead of current growth as investors’ price in a global growth rebound…(It) is now in the 96th percentile on our consolidated measure, with a wide variety of metrics very stretched.“

The Deutsche Bank analysts pointed out that systematic investment strategies have raised equity exposure to the top of their ranges -- to the point that the only time investment in equities have been higher was back in 2018 when it leads to a 16% correction from September through November that year. 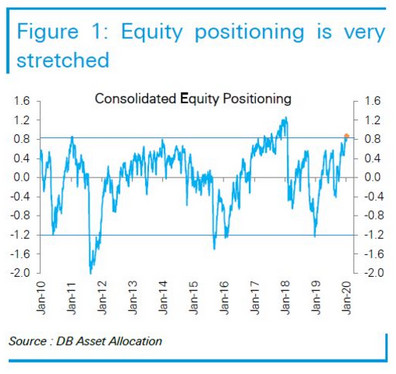 In their client note, they insisted that discretionary investors are now “clearly overweight” at the highest levels since October 2018, and equity futures long positioning for asset managers and leveraged funds combined is near record highs, they said.

We at WallStreetRebel.com warned on Friday, January 10th, that we believe the U.S. equities market is on the verge of a significant correction.

“Besides the risk of a sizable correction, we are also likely to volatile explode, as it did from September through December of 2018 when the Volatility index more than doubled from 12.12 to 25.40.

1.       Longs in emerging-market futures have risen to record highs

2.       Call/put volume ratios are at the top of their historical range

3.       Short interest in single stocks is near record lows

4.       Short interest in exchange-traded funds has fallen to a new low

The S&P 500 is already up 1.1% so far this year and closed at a new record high this past Thursday, ignoring international furor generated by U.S.-Iran tensions that lead to the former launching 12 ballistic missiles at two United States/Iraqi military bases. The rally in the last first ten days of 2020 comes after the benchmark soared 29% in 2019, its best performance since 2013.

Deutsche Bank AG equity strategist Binky Chadha's prediction for a flat 2020 said in his conclusion of the note that he is expecting the S&P 500 to end 2020 at 3,250 versus Friday’s close at 3,265. That’s notable in two respects, according to Bloomberg…

“One, because it's a turnaround from 2019 when his prediction was the most bullish on the Street; and two, because he was the most accurate last year, as the gauge closed out the year at 3,231.”

On Friday, Wall Street Rebel wrote to its readers…

“We don’t know what event(s) would trigger a nasty correction, but both Wall Street Rebel and McClellan’s signals are incongruent and we can’t exactly nail down the exact date of the exact day that the reversal and spike in the VIX. We do, however, see the smoke on the horizon. The deviations between the VIX versus the new highs that are being made are clear in his charts and ours is enough for us to recommend initially”…

To receive this recommendation, you must subscribe to World Opportunity Investor.  A one-year subscription costs just $72 – that‘s 54% off the regular subscription price.