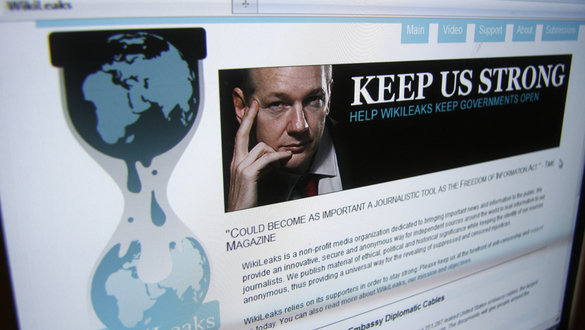 Now the big question gets answered.  Will President Trump pardon him from all the crimes he committed, and award him the American Freedom Medal?

The Ecuadorians finally had enough after nearly seven years, and Ecuador rescinded Julian Assange asylum at its embassy in London, after almost seven years into the waiting custody of British authorities who immediately arrested the WikiLeaks founder and who immediately acted on a U.S. extradition request.

According to London’s Metropolitan Police Assange was…

“Arrested on behalf of the United States authorities” and would “appear in custody at Westminster Magistrates’ Court as soon as possible.”

Chelsea Manning was a male who surgically became a female. As a man Bradley Manning had been a U.S. soldier was tried and convicted who served seven years for criminal violations of the Espionage Act and other offenses after turning over hundreds of thousands of classified and or sensitive military and diplomatic documents to Assange’s WikiLeaks.

“Julian Assange is no hero, and no one is above the law,”

“He has hidden from the truth for years.”

Hunt added that Assange was…

“holding the Ecuadoran Embassy hostage in a situation that was absolutely intolerable for them. So this will now be decided properly, independently by the British legal system respected throughout the world for its independence and integrity, and that is the right outcome.”

He said Britain and Ecuador have been talking “for a very long time about how to resolve this situation.” He praised Ecuadoran President Lenín Moreno for making “a courageous decision, which has meant we were able to resolve the situation today.” Hunt said that “what is not acceptable is for someone to escape facing justice, and [Assange] has tried to do that for a very long time, and that is why he is no hero.”

London's Metropolitan Police arrested Assange after they were…

“invited into the embassy by the ambassador, following the Ecuadorian government’s withdrawal of asylum.”

The Russian government believed by many to have co-opted WikiLeaks into a Russian intelligence asset and who has been conducting a serious of international murders of Russian dissidents using deadly toxins issued a hilarious reaction to Assange’s arrest accusing Great Britain of “strangling freedom” by taking custody of Assange.

Ecuador’s President Moreno, however, said in a video statement tweeted …

“Ecuador has sovereignly decided to terminate the diplomatic asylum granted to Mr. Assange in 2012. The asylum of Mr. Assange is unsustainable and no longer viable.”

Moreno went on to specifically cite Julian Assange’s involvement in what the Ecuadorian President described as WikiLeaks’ meddling in the internal affairs of other countries, referring to the leaking of documents from the Vatican in January…

“Mr. Assange violated, repeatedly, clear-cut provisions of the conventions on diplomatic asylum of Havana and Caracas, even though he was requested on several occasions to respect and abide by these rules. He particularly violated the norm of not intervening in the internal affairs of other states. The most recent incident occurred in January 2019 when WikiLeaks leaked Vatican documents.”

“Key members of that organization visited Mr. Assange before and after such illegal acts (under the protection of the Ecuadorian Embassy in London. This and other publications have confirmed the world’s suspicion that Mr. Assange is still linked to WikiLeaks and therefore involved in interfering in internal affairs of other states.”

“This man is a son, a father, a brother, and that he has won dozens of journalism awards and was nominated for the Nobel Peace Prize every year since 2010. Now powerful actors, including CIA, are engaged in a sophisticated effort to dehumanize, delegitimize and imprison him.”

Meanwhile, American fugitive former National Security Agency contractor Edward Snowden who was granted asylum in Russia by Vladimir Putin called Assange’s arrest as a violation of the freedom of the press….

“Images of Ecuador’s ambassador inviting the UK’s secret police into the embassy to drag a publisher of — like it or not — award-winning journalism out of the building are going to end up in the history books. Assange’s critics may cheer, but this is a dark moment for press freedom.”

The irony of Snowden a U.S. traitor lamenting about freedom of the press from Russia where journalists are routinely jailed and murdered because of their exercising press freedoms to expose the murderous and corrupt Putin government won’t be lost on anyone paying attention.

The big question is will our now lawless United States President who has said many times …“I love WikiLeaks”…will pardon Julian Assange before or after his trial. Analysts already regard Donald J. Trump as the most anti-free speech, anti-free press President in U.S. history.

Trump knows his election in 2016 received a great deal of help from both Russia and WikiLeaks. In fact, when special counsel Robert S. Mueller III indicted 12 Russian military intelligence officers, he accused these Russians of  “discussing the release of the stolen documents and the timing of those releases” with WikiLeaks — referred to as “Organization 1” in the indictment — “to heighten their impact on the 2016 presidential election.”

However, Assange had drawn attention from U.S. prosecutors since 2010 when WikiLeaks’ publication of 250,000 diplomatic cables and hundreds of thousands of military documents from the Iraq War illegally obtained.

The Trump administration is believed to have charges under the seal of secrecy. These charges are believed to be a conspiracy, theft of government property and violating the Espionage Act are among the possible charges.

Some federal prosecutors and members of both the Obama and Trump administrations have expressed the belief that WikiLeaks is not a journalistic organization. This includes former CIA Director and now secretary of state Mike Pompeo who characterized WikiLeaks as a “nonstate hostile intelligence service” and a threat to U.S. national security.

Pompeo has also endorsed the opinion of the U.S. intelligence community’s report concluding Russia interfered in the 2016 election also found that Russia’s primary propaganda outlet, and that Russian intelligence services “has actively collaborated with WikiLeaks.”