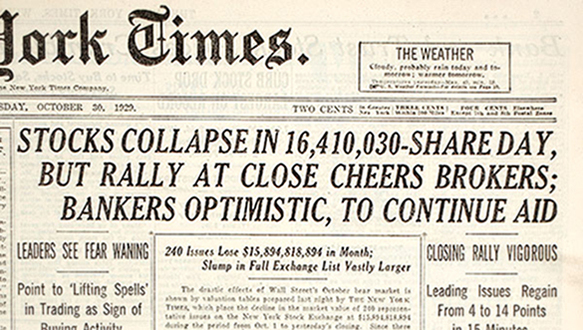 It is "déjà vu all over again” as Trump Revives Smoot-Hawley. . .

“Many scholars have long agreed that the Smoot-Hawley tariff had disastrous economic effects, but most of them have felt that it could not have caused the stock market collapse of  October 1929, since the tariff was not signed into law until the following June. Today we know that market participant does not wait for a major law to pass, but instead, try to anticipate whether or not it will pass and what its effects will be.

“Consider the following sequence of events:

“The Smoot-Hawley tariff passed the House on May 28, 1929.  Stock prices in New York (1926=100) drop from 196 in March to 191 in June.   On June 19 the Republicans on the Senate Finance Committee meeting to rewrote the bill. Hoping for improvement, the market rallies, but industrial production (1967=100) peaks in July, and dips very slightly through September.  Stocks rise to 216 by September, hitting their peak on the third of the month.  The full Senate Finance Committee goes to work on the tariff the following day, moving it to the Senate floor later in the month.

“On October 21, the Senate rejects 64 to 10, a move to limit tariff increases to agriculture. “A weakening of the Democratic-Progressive Coalition was evidenced on October 23,” notes the Commercial and Financial Chronicle. In this first test vote, 16 members of the anti-tariff coalition switch sides and vote to double the tariff on calcium carbide from Canada. Stocks collapse in the last hour of trading; the following morning is christened Black Thursday. . . The Chronicle  headlines  news  about  broker  loans on  the  same  day:  “Recall  of  Foreign  Money  Grows  Heavier-All Europe  Withdrawing Capital.” The following day is a stalemate. Stocks begin to rally after November 14, rising steadily from 145 in November to 171 in April. Industrial production stops falling and hovers around the December level through March.” — Alan Reynolds (1979)

Alan Reynolds’ excellent analysis from half a century ago was not intended as anti—Trump propaganda. To the contrary; He had no short-term political swipes to make. He wrote with a historian's perspective on the occasion of the 40th anniversary of the traumatic crash that ushered in the Great Depression.

Reynolds details a pattern that will be familiar to traders who recently have been contending with various Trump tweets. Stocks rally on even the flimsiest hints of progress toward a trade accord. On the other hand, protectionist measures provoke market selloffs, whereas hints that tariffs will be raised or made permanent place downward pressure on stock values.

In 1929, there were no international negotiations over tariffs and trade. The damage done by Smoot-Hawley was entirely self-imposed. After the initial passage of tariff increases by the House of Representatives on May 28, 1929, stock prices were under pressure until June 19, 1929, when Republicans on the Senate Finance convened with promises to re-write the bill. Then, as now, the market was beguiled by the hope that freer trade would prevail.  It did not. On October 21, the Senate voted 64 to 10 to reject a move that limited tariff increases to agricultural products.

Moreover, 16 senators of the anti-tariff coalition switched sides and voted to double the tariff on calcium carbide from Canada that was used in steel production. This vote on October 21 made clear to any thinking observer that the push for higher tariffs was destined to succeed. Stocks began to collapse that made 1929 infamous in the last hour of the trading day. The next morning brought Black Thursday in the most devastating stock market crash in US history — the Dow Jones industrial average plunged 11% at the open.

Here I confess that I have tended to reflect conventional wisdom that the US-China trade war would be contained with a feel-good arrangement to be signed to broad smiles and pats on the back by Pres. Trump and Chinese President Xi. Evidence to this point calls that happy assumption into question.

When I formulated a trading strategy in an attempt to make the best of this fraught situation, I opted for an iShares China Large-Cap ETF’s option calendar spread. The negative end of the trade is in place for January 2020, by which time I expect more of the negatives associated with the unraveling of the credit boom to make them known.

My supposition that markets would rally, perhaps overly enthusiastically on any semblance of a trade agreement seems well-founded. Indeed, that pattern was vividly evidenced in 1929. The pattern of trading in 1929 also explains the logic of attempting to sort out a trading strategy in this circumstance.

Events of 1929 showed how a robust stock market boom could vanish in a hurry, taking much of the wealth stock investors directly to money heaven.

In light of the record of Smoot Hawley in triggering one of the most devastating episodes of stock market carnage in history, it is amazing that President Trump prepared to risk everything by risking a re-run of Smoot-Hawley. High tariffs in the late stages of a credit-driven asset bubble are a recipe for triggering hyper-deflation.

That was the outcome in 1929. There is a nontrivial risk of a similar outcome now. I don’t know what President Donald Trump thought when he tweeted that “trade wars are good and easy to win. ...

Moreover, it is by no means hyperbole to speak of Smoot Hawley again. Trump is imposing tariffs under the Tariff Act of 1930, aka, “Smoot Hawley. He is undoing the better part of century’s progress toward free trade by re-imposing Smoot Hawley tariff rates.