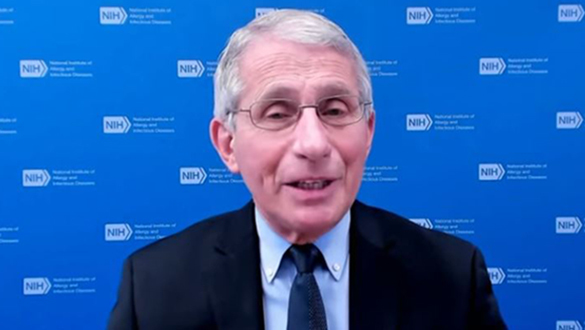 Dr. Anthony Fauci tried not to overtly blame former President Donald Trump for how the coronavirus devastated the United States. Still, he said Tuesday, he finally fessed up about how the former president’s denial about the pandemic contributed to the death toll.

During an interview with CNN’s Alisyn Camerota Tuesday, Dr. Anthony Fauci, the director of the National Institute of Allergy and Infectious Diseases, was asked if Former President Trump’s actions contributed to the U.S. death toll.  The death toll crossed the 500,000 mark this week and amounts to more deaths than the first and second world wars, Korean and Vietnam wars combined….

“Do you think that his denial and lack of facts contributed to this level of loss?”

“I certainly think that that’s part of it. When you have such a common force, such a powerful force against you…you’ve got to do it together in a unifying way and not have any kind of political ideology divisiveness getting in the way of what we’re trying to do. That’s not the only thing that really was a problem, but that’s certainly in my mind, having lived through it, was something that I found really to be unfortunately damaging.”

“Do you think that his denial and lack of facts contributed to this level of loss?”

“I’m uncomfortable going back and directly criticizing, but it’s really almost self-evident that when you’re trying to signal the country to really buckle down and address the kinds of mitigation strategies that we put forth — the wearing of masks, the physical distancing, the avoiding congregate settings, the kinds of things that I and many of the other public health people, who were there, trying to get the country to appreciate the this that we were trying to do all throughout the entire outbreak.”

“I mean, the thing that I remember very clearly is when we were trying to open up the country, open up the economy and to do it carefully with the gateway, the phase 1, phase 2, the phase 3. I was hoping that would see a uniform, unified approach towards all doing that together. And when signals come saying ‘this isn’t so bad, we’re in pretty good shape,’ when we’re saying we’re not, we being the health people, that was not helpful, because the people who wanted to deny that this is something that was serious when you get a signal from above that it might not be [so bad], then you don’t do the kinds of things you need to do.”

Fauci: This has been my lowest point during the Covid-19 pandemic