‘Dr. Doom’ Warns Second Great Depression Unless there is a Massive Government Stimulus 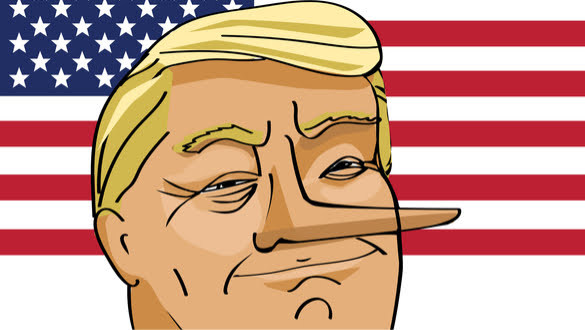 Only 38% of Fox viewers surveyed by The Economist and YouGov found they were worried about the virus, compared with 74% of MSNBC viewers and 71% of CNN viewers who say they are concerned. Proving Mark Twain correct when he said… “No amount of evidence will ever persuade an idiot.”

President Trump and his Kakistocracy of an administration have shifted in the last 24 hours from dismissing the danger of the pandemic underway to insisting they were taking the pandemic seriously since the beginning of the coronavirus outbreak.

The flip from not being remotely concerned to claiming they were the ones warning this was going to be a pandemic would be laughable if it weren’t for all the people who will get seriously ill and even die from this pandemic. A GOP group determined to expose President Trump’s incompetence and lies released the following video that shows precisely how insane it is not to recognize the incompetence and dishonesty of our President….

Yesterday, Secretary of the Treasury Steve Mnuchin insisted that unless the House and Senate pass the administrations Trillion dollar bailout bill – unemployment will rise to 20%. This morning, Kelly Anne Conway, after days of repeatedly telling America there was no danger, and the coronavirus outbreak was under control flipped and is now warning about the dire “devastation the virus can cause”.

The continuing lies and incompetence of this White House and President have resulted in the United States is unprepared medically and economically for the social, economic, and human tragedy that is already underway.

The disaster underway has caught the attention of Economist Nouriel Roubini, who earned the nickname “Dr. Doom” for his accurate predictions about the 2008 global financial crisis. Roubini believes that the United States will enter into a second Great Depression unless the government acts now to inject money into the economy.

In an interview with Yahoo News, Roubini said that the government should send out $1,000 checks immediately to every American to help them pay for their material needs during a time when mass layoffs are looming.

Roubini poured salt into the predicting by telling Yahoo News that the very best we can hope for at this point is a “very severe, but short, recession” in the wake of the pandemic.

The shut down of nonessential businesses in major cities across the United States, the closure of the Canadian U.S. border, is likely just the beginning of the economic damage…

“But if we have the monetary easing, we have right now, if we control the pandemics by doing systematic quarantines, maybe by June-July the pandemic is stopped, and maybe by the fourth quarter of this year we are going to have an economic recovery,”

U.S. Stock Market May Be Forced to Close!

The danger and alarm are being echoed today, Ben White, a financial analyst, interviewed by Politico, who predicts that soon, the economic crisis will grow so severe that the stock market will have to close. Yes, close for a prolonged period, beyond the recent “circuit breaker” trips that have paused trading for a few minutes. He’s talking about a shutdown that will for not just hours but days, perhaps weeks.

“Full stock market shutdowns are very rare but have happened from time to time. These closures have happened for a variety of reasons, ranging from software or paperwork problems on the trading floor to catastrophic events like the assassination of John F. Kennedy or the September 11 terrorist attacks. The most recent stock market shutdown occurred in 2012, as New York City was recovering from Superstorm Sandy.”

While some have called for a market closure in response to the coronavirus pandemic, financial officials, including the Secretary of Treasury has been staunchly opposed to the idea.

“Closing the markets would not change the underlying causes of the market decline. It would remove transparency into investor sentiment and reduce investors’ access to their money… This would only further compound the current market anxiety.”

Steve Mnuchin, while resisting a trading shutdown, has suggested that trading hours may be cut back. That alone would knock another 2,000 points of the Dow Jones.