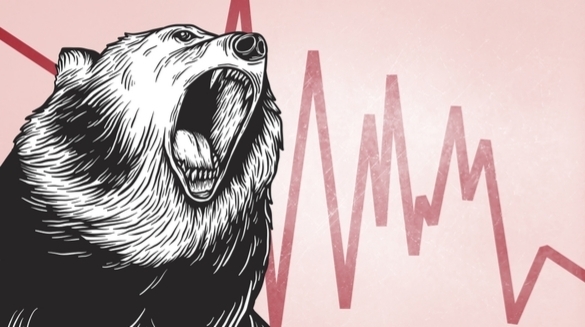 Wall Street enters a bear market as the S&P 500 falls by 3.9%. Fears of a shaky economy and rising interest rates pushed the S&P 500 more than 20 percent below its early-year record on Wall Street on Monday, triggering a bear market.  Before closing with a loss of 876 points, the Dow Jones Industrial Average dropped more than 1,000 points.

Wall Street almost dodged a bear market three weeks ago, with stocks bouncing back at the last minute from a painful collapse that had pushed the S&P 500 down 20 percent from a record high in January. The subsequent few weeks provided a ray of hope that the worst of the losses could be avoided.

That gleam of hope no longer exists.

The Standard & Poor's 500 Index had a decline of 3.9 percent on Monday, concluding the day about 22 percent lower than its all-time high reached on January 3 and firmly in a bear market. This is a rare and frightening indicator of investors' mounting concerns for the economy.

Both the Consumer Price Index (C.P.I.), which was just published on Friday, and the Personal Consumption Expenditures index (P.C.E.) are considered to be the critical inflation gauges in the United States. Economists and policymakers are keeping a careful eye on both of these indices.

The figures for the P.C.E. were derived, in part, from the data contained in the index. Because it is published earlier, the C.P.I. measures how much consumers pay for the various products they purchase. Because of this, it provides the nation with its first clear look at how inflation fared in the previous month.

The reports indicated that inflation in the United States was picking up speed and was making its way into every sector of the economy. The World Bank issued a stark warning earlier this week that global development may be hindered, especially as the conflict in Ukraine carries on for an extended period of time.

The accumulation of these facts casts doubt on the hope that the Federal Reserve will be able, as it raises interest rates, to keep price increases under control without causing harm to the economy of the United States and sending ripples across the rest of the world.

At the close of trading on Monday, reports indicated that the Federal Reserve's policymakers would most likely consider the possibility of implementing the most significant increase in interest rates since 1994 during their meeting this week.

This bear market began on October 24, 2018. Large stock falls such as this one, which is just the sixth bear market in the previous 50 years, typically precede a tectonic shift in the outlook for the economy and wreak havoc on people's retirement plans. Recessions have typically followed bear markets, even though the two events are not caused by one another. The last time there was such a significant drop in stock prices at the Coronavirus pandemic's beginning. Before that, it happened during the global financial crisis of 2007–2008, which brought down some of the largest banks in the world.

However, the bear market in 2020 was over in a relatively short period of time, lasting only six months. Analysts of stocks are concerned that this downturn will continue for a more extended period of time.

The stock markets in Australia, Japan, and China all opened in the red due to concerns about the economic situation in the United States. On Tuesday morning, the primary stock index in Australia had a decline of 5 percent, sending it to levels not seen in the past two years. In the early trading, the Nikkei stock index in Japan was down 1.6 percent, and the Shanghai Composite Index in China was down almost 1 percent.

Investors are concerned that the Federal Reserve will severely damage the economy in its efforts to bring inflation under control. The current decline in stock prices can be attributed to businesses and consumers being met with rising prices practically wherever they turn. Wall Street is bracing for interest rates, which were very close to zero in March, to rise to as high as 3 percent by September. This is because the central bank has hiked rates twice this year, bringing the total number of rate increases to two. When we were in the midst of the Great Recession was the last time we saw the federal funds rate at such a high level.

The contraction resulting from increased policy rates spreads across the economy to make borrowing of any form more expensive; this includes mortgages and debt incurred by businesses. Because of this, the housing market is slowed down, consumers are discouraged from spending, and companies are prevented from expanding.

However, interest rates are a blunt instrument, and their economic impact is delayed. Because of this, it is difficult for the Federal Reserve to determine whether or not it has gone too far before it is too late.

As a result of higher food prices, rents, and home prices, consumers are beginning to feel the financial strain, which is leading to an increase in the cost of borrowing money. This, in turn, has a negative impact on consumer spending, which has traditionally been a primary engine of economic growth in the United States.

The sale that took place on Monday was the greatest daily fall in a month, impacting several different areas of the financial markets. Every major stock market sector in the United States finished lower, as did the benchmark indexes in both Europe and Asia. Both the price of oil and bonds issued by the government fell. And Bitcoin dropped below $24,000, marking its lowest price in 18 months. This year, the value of the cryptocurrency has dropped by around half.

The Federal Reserve is scheduled to reveal its most recent economic estimates on Wednesday, which investors will surely dissect in great detail. They may feel more at ease if the projections made by the central bank for the course of interest rate hikes are milder than what was anticipated.

According to Lauren Goodwin, an economist and portfolio manager at New York Life Investments, inflation will need to decrease in the coming months. Only then will investors be able to cease fretting about the state of the economy.

The impact of the other policy move made by the Fed is another question that investors have yet to have answered. In response to an emergency measure implemented early in the epidemic, the central bank began purchasing government bonds. This was done to maintain a steady flow of funds across the financial system.

Ms. Goodwin referred to this topic as a significant wild card for investors.

Ms. Shah said there would likely be a continuation of the market's decline into a second stage. Stock prices can drop much further when further signs of economic distress emerge in the form of business earnings, consumer spending, and other statistics that demonstrate that the worst-case scenario for the economy is coming true. It's possible that the next round of sales won't start until we get closer to the end of this year.

Economic pressure may come from all the talk of recessions and bear markets, at the very least. In part, this is because people will see their investment, retirement, or college savings accounts fall in value and begin to reduce their spending.

S&P 500 falls into bear market: Here's what that means