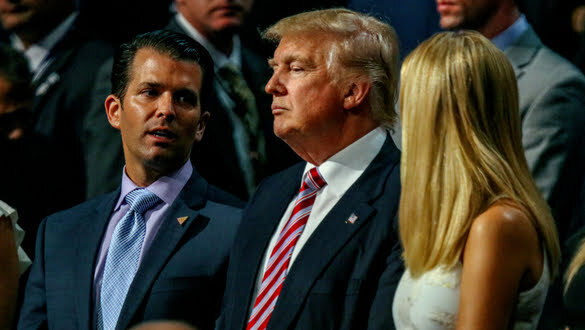 The U.S. Attorney for the District of Columbia investigates whether Donald Trump's inaugural committee illegally misspent more than $1 million. The attorney general's office had initially filed a civil lawsuit against the 2017 inaugural committee and the Trump Organization. Now the matter could culminate in criminal prosecution.

The civil lawsuit brought by the Attorney of the District of Columbia against the 2017 inaugural committee and the Trump Organization was on its way to be settled out of court stalled earlier this month. Investigators suddenly decided that no settlement could be reached until they complete their investigation, according to The Daily Beast.

Since the negotiations to settle out of court have broken down, a few new wrinkles in the case have emerged that could turn what was a civil lawsuit into a criminal prosecution of both Donald Trump Jr. and Ivanka Trump.

Investigators from the D.C. AG's office suspect that Donald Trump Jr., Ivanka Trump, and others funneled money from the inaugural committee to the Trump International Hotel in Washington, which allegedly overbilled the nonprofit committee for the family's gain.

D.C. AG Karl Racine has argued before D.C. Superior Court Judge José López that the evidence he's already presented weighs heavily in the District of Columbia's favor. Insisting the evidence is similar to that presented to a New York State could lead to the summary judgment in a 2018 case against the Trump Foundation and the eventual dissolution of the ex-president's charity.

The cases are so similar that it may establish enough of a pattern that would force the D.C. attorney general's investigators to refer all the evidence to law enforcement and criminal prosecutors for prosecution. The D.C. AG is now focused on seeking additional testimony from Don Jr.'s college friend Gentry Beach and former Trump Organization employee Kara Hanley.

Meanwhile, Kara Hanley, a former executive assistant for the Trump Organization, was also involved in that scheme, according to investigators has been ducking any further questioning. Why?

The last week Tom Barrack, the 2017 Trump Inaugural Committee's Chairman and longtime friend of the ex-president, was arrested. Last week he pleaded not guilty to charges that he secretly lobbied for the United Arab Emirates, posting one of the largest bails in U.S. history- amounting to $250 Million.

It's reported that Barrack and Trump have had a huge falling out in the last year as the investigation into Trump's 2017 Inaugural Committee expanded.

Also, Barrick, a citizen of Lebanon, is facing charges that could put him behind bars for 20 years if he is convicted.

Legal observers suggest that Barrack could cut a deal and reduce his criminal exposure dramatically by providing prosecutors evidence of criminality committed by Ivanka and Donald Trump Jr. and their friends Gentry Beach and Kara Hanley.

For Ivanka, news of another possible criminal prosecution beyond her exposure in the potential prosecution by the Manhatten D.A. and State of New York for tax evasion and conspiracy must be keeping her up at night.

Ivanka's other brother Eric Trump also a possible target in the Manhatten D.A. and State of New York investigation that has already resulted in the criminal indictment of the Trump Organization and its longtime CEO Allen Weiselberg has vanished.

The press and legal observers see Eric's disappearance as a possible indication that he may be the next person indicted by the Manhatten D.A. and State of New York prosecutors.