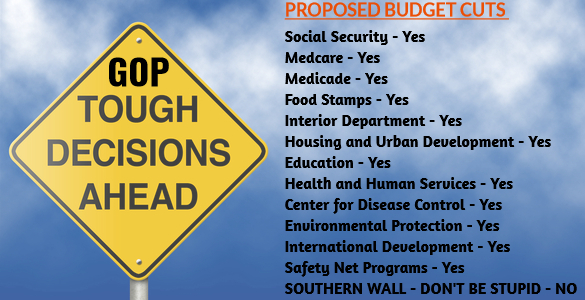 "We will not be touching your Social Security and Medicare in Fiscal 2021 Budget."

Then hours later, he submitted a 2021 Fiscal Budget that extends his tax cuts for the rich, extends massive spending on his proposed border wall and then slashes and cuts Social Security, Medicare, Medicaid and  food stamp programs.

Trump’s $4.8 trillion budget proposal released yesterday proposed cuts in Medicare by $850 billion, cuts Medicaid by $920 billion, and cuts Social Security by $30 billion over the next decade, according to The Washington Post.

Trump’s 2021 budget goes after our nation’s food stamp program by slashes $181 billion while at the same time cutting the education budget 8%, Health and Human Services Budget by 9%, which includes cutting the budget of the Centers for Disease Control (CDC). Given the Ebola and Wuhan Coronavirus type outbreak, the cuts to the CDC are not worthy of a man seeking the Presidency of the United States.

Trump’s cuts don’t stop with the social safety net; they also go after the Environmental Protection Agency budget with a 26% cut.

The Interior Department gets a 13% budget cut; the Department of Housing and Urban Development suffers a 15% cut, and Trump’s budgets for both the State Department and U.S. Agency for International Development would see a 22% cut in funding.

Trump’s wall at the southern border, however, gets an extra $2 billion.

Even with all these massive cuts in the social safety net Trump and GOP’s budget plan would fail to eliminate the deficit over the next decade which projected to climb by $13 trillion.

Trump, when running for President in 2016, promised he would balance the budget in 8 years and will eliminate the entire federal debt. Trump submitted a budget that claims it will end the deficit in 15 years because it assumes these cuts in the social safety net is based on the assumption of the U.S. economy grows by an unprecedented 3% through 2025; a growth rate the Trump administration hasn’t been able to deliver in its first three years in office and looks to be impossible to achieve this year.

Growth has continued to decline under President Trump, falling to 2.3% in 2019 — the weakest GDP growth since he took office and the estimate for 2020 is for growth less than 2% this year. The Congressional Budget Office, the U.S. economy, will grow by just 1.7% through 2030.

Again, Trump had claimed that the economy would grow by 4 to 6% while running for President in 2016, but growth has been barely over 2% in each of the last three quarters, slower than during the final three years of the Obama administration.

The Federal budget deficit this year is expected jump by $1.3 trillion this year driven by the enormous 2017 Trump tax cuts, which blew a $1.5 trillion hole in our nations tax collection needed to pay for the budget. Bottom line the federal debt has grown by about $3 trillion under Trump in three years to benefit the ultra-rich and corporations.

Most of the tax cuts overwhelmingly flowed to the very rich.

While wages remain stagnant for the 99%, Trump’s Monday budget proposal does propose that the small tax cuts for the middle-class set to expire in 2025 are extended through 2035 as an attempt at a face-saving, cosmetic feature. These would, however, cost another $1.4 trillion, according to the plan.

Despite the unlikelihood of the budget generating enough revenue to cover its costs, it costs over $1 Trillion a year at the real economic growth rate Trump’s budget claims…

"All administration policies will pay for themselves, including extending tax cut provisions expiring in 2025."

"This destructive and irrational President is giving us a destructive and irrational budget…He is proposing deep cuts to critical programs that help American families and protect our economic and national security. Furthermore, the budget reportedly includes destructive changes to Medicaid, SNAP, Social Security and other assistance programs that help Americans make ends meet – all while extending his tax cuts for millionaires."

Sen. Jeff Merkley (D-OR), who sits on the Appropriations Committee, after reviewing the proposed budget, accused Trump of falsely claiming that he would not seek to cut vital health programs tweeted….

"These cuts are a dangerous assault on American families with this budget, his promises not to cut Medicare and Medicaid lie shattered on the ground."

Senate Democratic Leader Chuck Schumer (D-NY), said the budget proposal shows that Trump's State of the Union vows were nothing but one big long…

"Lie to the American people…By proposing severe cuts to Medicaid and Medicare, President Trump's latest budget is simply a continuation of his war to rip away health care from millions.”

"Just how little he values the good health, financial security, and well-being of hard-working American families."

"Year after year, President Trump's budgets have sought to inflict devastating cuts to critical lifelines that millions of Americans rely on… Less than a week after promising to protect families' healthcare in his State of the Union address, the president is now brazenly inflicting savage multi-billion-dollar cuts to Medicare and Medicaid — at the same time that he is fighting in federal court to destroy protections for people with pre-existing conditions and dismantle every other protection and benefit of the Affordable Care Act."