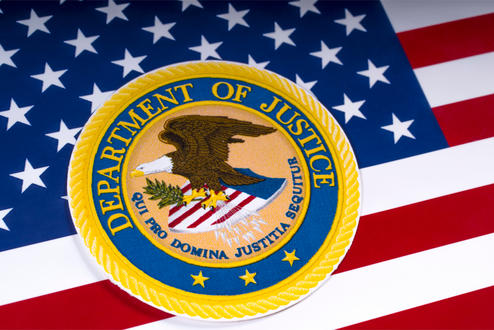 Any current or former Department of Justice official who was engaged in an improper attempt to alter the 2020 Presidential Election outcome could be confronted with the department’s Inspector General.

The allegation was made several times during the last couple of weeks by members of the press that some officials, Trump loyalists, at the Department of Justice (DOJ) were fully cooperating with POTUS45 in his effort to overturn the 2020 presidential election were confirmed by news reports over the weekend.

It’s been reported by The New York Times that President Trump pressured the Justice Department to overturn the 2020 election so that he could stay in power. His plan was apparently to remove acting Attorney General Jeffrey Rosen after William Barr left so that he could put in place someone to keep him in power by telling Georgia officials that the DOJ was investigating election fraud in the state.  And therefore, it could throw out the election results and call the state and its electoral votes for President Trump.

During his presidency, Donald J. Trump fired Inspector generals of several Federal agencies to cover up wrongdoing. Now that he’s out of office, he should expect new and existing inspector generals to begin looking into whether anything improper conduct occurred during Trump’s time in office. In this instance, the tumultuous weeks under acting AG Rosen are being targeted by the Office of the Inspector General of the Justice Department, according to a press release by that office released today signed by Inspector General Michael Horowitz …

“The DOJ Office of the Inspector General (OIG) is initiating an investigation into whether any former or current DOJ official(s) engaged in an improper attempt to have the DOJ seek to alter the outcome of the 2020 Presidential Election.” 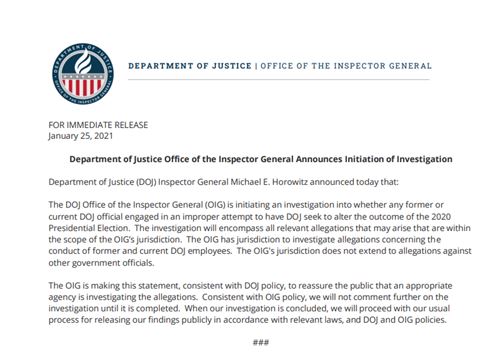 Members of Congress have also indicated an interest in pursuing the allegations. Still, it remains unclear whether they will figure prominently in an impeachment trial Trump is scheduled to face in the Senate in roughly two weeks.