Does Pope Francis Have Coronavirus? 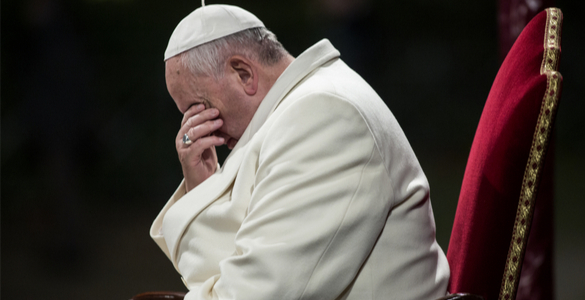 Pope Francis following Ash Wednesday mingling with Vatican visitors came down with a cold. This is causing great concern by his admirers as Italy is battling a surging outbreak of the potentially deadly COVID-19.

Pope Francis spokesman Matteo Bruni dismissed on Friday any speculation that Francis was anything more than slightly unwell...

“There is no evidence that would lead to diagnosing anything but a mild indisposition.”

The problem with this assurance is that if the Pope has contracted the coronavirus (COVID-19), he may be too early in the incubation stage to be accurately tested for the virus.

Pope Francis announced on Sunday that a cold he is suffering from had forced him to skip a Lenten spiritual retreat with senior Vatican officials near Rome for the first time in his papacy. A number of people who attended St. Peter’s Square today to hear the Pope wore surgical face masks.

Italy has registered more than 1,100 confirmed cases of coronavirus since February 20 and at least 29 deaths; the worst such contagion in Europe.

The cancellation of the was a personal setback for the pontiff, a member of the Jesuit religious order, which, like other groups in the Church, places great significance in holding retreats and spiritual exercises away from one’s normal workplace. On Wednesday, while the Pope greeted visitors celebrating Lent Ash Wednesday services at the Vatican, other services were canceled or limited in areas of northern Italy hit by the spread of the virus.

Francis also suffers some leg pain due to sciatica, for which he undergoes regular physical therapy and which explains his occasional difficulty climbing steps. However, aside from this issue, the 83-year-old pontiff has been remarkably healthy for his age.

The surprise cancellation of his scheduled retreat, which will keep him from attending, marks the first health scare for the 83-year-old pontiff since his election in 2013. The retreat was due to start on Sunday afternoon, so the cancellation was made at the last minute.

The Pope made the announcement himself to thousands of people in St. Peter’s Square during his first public appearance since last Wednesday, and was heard and seen coughing and sneezing today.

“Unfortunately, a cold will force me not to take part this year (in the retreat). I will follow the meditations from here.”

Catholics and people who admire Pope Francis must keep in mind that while his health has been good, he is missing a part of one lung. It was removed when he was in his early 20s in his native Buenos Aires, Argentina, after an illness.

The Vatican had before him, and his spokesperson’s admission today denied that Francis was suffering from a “slight indisposition” and now is admitting he missed most audiences in the past three days. The Pope also said today…

“I will unite myself spiritually with the (participants) and all people who are living moments of prayer. I will do the spiritual exercises from home.”

Il Sismografo, a news service that follows the ins and outs of the Catholic Church and its affairs, said it was the first time since 1950 that a pope has missed a Lenten retreat.