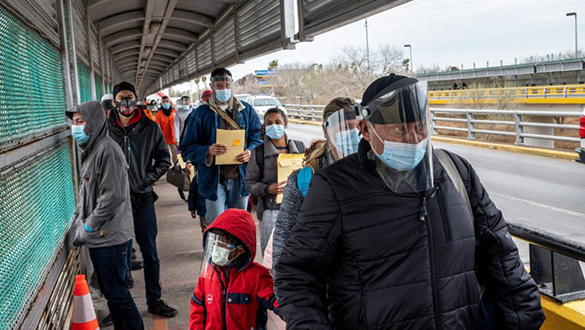 The United States could be seeing an insurgence of migrant immigrants crossing the US-Mexico border not seen in 20 years.

The Biden administration’s head of Homeland Security, Alejandro Mayorkas, insisted Tuesday that the situation at the southwest border is under control, despite severe criticism, as he defended a policy that allows teenagers and children to cross the United States border alone to stay in the country.

Amid the coronavirus pandemic, Homeland Security acknowledged that an increase in the number of children, mainly from Central America, is a problem for the Border Patrol and other agencies. He, however, opposed a Trump-era policy of returning them to Mexico or other countries right away.

“They are innocent children, and we have ended the previous administration’s practice of removing them,” Mayorkas said in his most comprehensive speech yet on the border situation, which he described as “difficult” but not really the disaster that critics have depicted.

Migrants attempting to cross the border have decisively risen, which is at its highest level since 2019 but on track to reach a 20-year high, which has become an early challenge for President Joe Biden. Biden is attempting to distinguish himself from his immediate predecessor, President Donald Trump, who waged an extensive campaign to dramatically reduce legal and illegal immigration.

Republicans in Congress say that Biden’s support for immigration reform and decision to encourage people to file legitimate asylum claims has attracted migrants. Still, Mayorkas points out that there have been spikes in the past, including under Trump.

Some progressive Democrats and others have chastised the Biden administration for detaining migrant children for longer than the permitted 72 hours in U.S. Customs and Border Protection detention centers as it struggles to fill shelters operated by the Department of Health and Human Services.

The number of children crossing by themselves was more than 9,400 in February alone. The rise is attributed to a variety of factors:

On Monday, House Minority Leader Kevin McCarthy led a group of a dozen Republican lawmakers to the Texas border, blaming the Biden administration for pushing up the number of migrants by endorsing bills in Congress that would include a path to citizenship for millions of undocumented immigrants already in the country and halting border wall construction.

“The unfortunate thing of it all is that it didn’t have to be this way. This crisis was caused by the new administration’s presidential policies.”

On the other hand, Trump faced a similar surge in 2019 when he hurried to extend the border wall scheme, forcing asylum seekers to seek asylum in Central America or stay in Mexico. He had forcefully separated migrant children from their families a year before as part of a zero-tolerance program that became one of his administration’s most important political challenges.

The number of migrants apprehended while crossing the border started to increase in April after declining during the early stages of the pandemic. People who are repeatedly caught after being expelled under the public health order account for some rise.

Between January and February, U.S. Customs and Border Protection met about 28 percent more people, totaling just over 100,000 people, most of whom were single adults. In June of this year, the number was at an all-time high.

Migrants under the age of 18 are permitted to stay in the country until the government determines whether they have a legitimate citizenship claim. This is either under asylum law or for another purpose.

The United States continues to deport most single adults and families to Mexico or their home countries. Exceptions are made for people with “such acute vulnerabilities,” which Mayorkas did not define, and for families where Mexican authorities do not have shelter ability to accept them.

Mayorkas reported that 80 percent of the children, the majority of whom are from Central America’s Northern Triangle, have a relative in the United States, and 40 percent have parents.

Last week, the Biden administration reversed a Trump administration policy that made relatives afraid of being deported if they contacted HHS to retrieve their children.

It has enlisted the Federal Emergency Management Agency’s help to set up new temporary facilities in Texas and Arizona to house migrant children. It’s also collaborating with HHS to increase shelter capacity and support assistance to Honduras, Guatemala, and El Salvador to stop migrants at the border.

Mayorkas slammed the previous administration for repealing an asylum scheme that would have allowed for a more “orderly” immigration system, as well as slashing assistance to Central America and failing to vaccinate Border Patrol agents.

“The situation we have at the southwest border right now is difficult,” Mayorkas said. “We’re taking care of it.”

Biden facing pressure amid surge in migrants at border