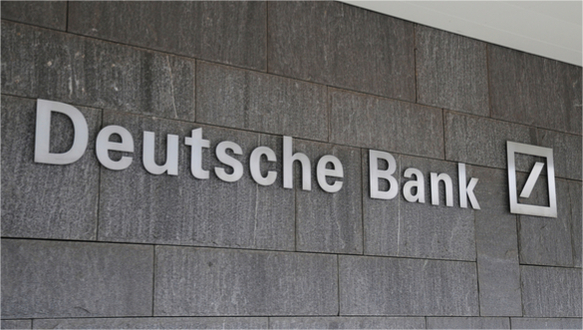 The European Union never cleaned up their banks as the U.S. did after the 2008-2009 financial crisis. Now one of the largest banks in the world, Deutsche Bank (DB) appears to be on the brink of a Bear Stearns or Lehman Brothers type of collapse. At the core of the danger is Deutsche Bank’s exposure in the derivatives market.

By James DiGeorgia and Geoff Garbacz

I’ve been warning for a few months that a devastating “black swan” financial event is approaching. The danger I have been worrying over could be as devastating as the financial crisis the world suffered through from 2007 through 2009, perhaps worse.

Now I’m compelled to warn that the U.S. and foreign equity market nosedive we saw in December may not have been the “black swan” event, but instead, the first glimpse of the financial nightmare is approaching. The nosedive in the equity markets in December; one of the worst in decades, had been triggered by three forces…

2.     Fears over a global economic slowdown, which could be compounded by a U.S. government shutdown

Yet, during January, the Federal Reserve made it known it didn't intend to ratchet up interest rates, optimism started to take hold that the Trump administration would be able to negotiate a trade deal with China that will end the trade war by the March 1, 2019 deadline. The positive sentiment then led to one of the biggest January rallies in years. But while January was promising, an ominous, dangerous financial cloud is rising as one of the biggest banks in the world; Germany’s Deutsche Bank (DB) is on the precipice of Bear Stearns or Lehman Brothers size collapse.

News that the German government and Deutsche Bank have been hunting high and low for a suitor to save the day to no avail which has lead to reports that a forced blockbuster merger with the country’s other giant state-owned bank Commerzbank AG has been may be the only workable option.

The lack of any other viable solution for Deutsche Bank centers on the fact that its problems are so immense because of the size of the banks’ exposure. In the quadrillion derivatives market is believed to nothing short of both a merger and a German government bailout will be required to prevent the complete collapse of Deutsche Bank.

“Instruments whose values are derived from the prices of other things, like a stock or a barrel of oil or a bundle of mortgages. Originally designed to protect their holders against future risks, they evolved into vehicles that traders used for financial speculation. Unlike stocks, they often aren’t traded over public exchanges, which means the market — and who is exposed to what — is opaque.”

The 2010 Dodd-Frank law was supposed to improve regulators’ ability to monitor derivatives in the wake of the 2008-2009 meltdowns of Bear Stearns, Lehman Brothers, both of whom were bankrupted in large part due to their exposure to derivatives. American banks thanks to Dodd-Frank were compelled to start reporting their derivative trades and holdings, including whom they traded with, to the Commodity Futures Trading Commission (CFTC).

The goal was to prevent a recurrence of the financial crisis when fatal problems at Lehman Brothers and Bear Stearns triggered a massive banking crisis at other banks connected to the two former banking giants through derivatives. No one, not even Bear Stearns or Lehman Brothers had any idea of how immense the problem was even as the banks were on the verge of collapse, and out of the fear banks around the world stopped lending to one another, credit froze, and all hell broke loss.

The problem now is that the Dodd-Frank Act has a big giant hole, foreign and domestic banks are not required to disclose to American regulators their derivatives positions maintained in most offshore entities. This means that even if a foreign bank like Deutsche Bank their American parent company is STILL legally on the hook to bail out its foreign subsidiary if it gets into trouble. This means that if Deutsche Bank faces a derivatives collapse we could see many U.S. banks with operations overseas connected to Deutsche Bank wiped out The crisis in the making could well be as bad as or worse than the banking and financial nightmare that took place in 2007-2009. The fallout for U.S. and foreign equities market could be catastrophic.

A “black swan” is a highly improbable catastrophic even that when it occurs is capable of destroying both individual and national financial security. Deutsche Bank may be on the verge of triggering something as bad as what occurred in 2008-2009, or even worse. Investors should limit their exposure in the equity and bond markets in our opinion and move into cash and or U.S. treasuries.