‘Deranged Donald’ On the Precipice of Igniting World War III; $200 Oil and Millions Will Die! 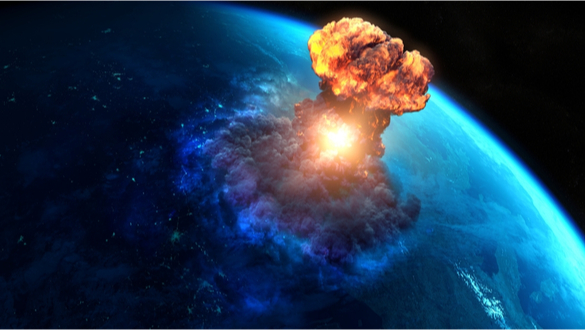 Trump besieged with scandals, facing impeachment inquiry for a myriad of crimes, a slowing economy may be days away from igniting what will become World War III. Most will focus on the price of oil at first, then whether Trump will use one or more nuclear weapons to achieve his plan. The reality of tens of millions of civilians being murdered will be part of the American psyche and national shame for centuries.

Presidential Advisor Kelly Anne Conway’s husband, George T. Conway III, and well-respected conservative recently gave the President of the United States the lifetime nickname “Deranged Donald’. The nickname took on a new meaning and credibility when Trump claimed a month ago he could win the war in Afghanistan in a week.

It was clearly a threat of a tactical first military deployment; the use of one or more nuclear weapons deployed as a strategic first strike, for the first time since the end of World War II, to be used against the Taliban. Now with the peace talks have collapsed in Afghanistan and Trump is accusing the Iranians of using drones to shut down half of the oil production and exports of Saudi Arabia, the president is saying he “locked and loaded” if definitive proof is uncovered that the Iranians were behind the attack on the Saudi Arabia drone attack.

Before the drone attack, President Trump was willing to sit down with Iran’s President Hassan Rouhani without pre-conditions and was rumored to be ready to suspend sanctions against Iran. President Trump’s willingness to drop the sanctions, and even endorse a $15 billion line of credit, proposed by French Prime Minister led to the dismissal of Trump’s third national security advisor, John Bolton. However, the drone attack claimed by Houthis rebels in Yemen as a response to Saudi Arabia bombing Yemeni Civilians — with United States-Made Weapons has changed the president’s peace directive.  A fact established by Amnesty International.

The fact that Trump feels compelled to attack Iran because the Houthis used Iranian weaponry to attack the Saudi’s oil production infrastructure while the Saudi’s are using U.S weaponry to murder and starve the people of Yemen is criminally ironic.  This paradox becomes more evident since Trump is providing the arms to Saudi Arabia only after using a veto against the expressed will of the United States Congress.

During the last few years, I’ve often been asked to share my thoughts regarding specific scenarios, which could drive up global oil prices back to its historic highs.

I’ve always held that a worst-case scenario would involve a situation where Saudi Arabian oil production centers, and other Sunni oil producers oil production are knocked out by hostile forces, causing oil supply to fall not just monumentally but for several-months. I’ve made it clear that one of the most significant variables is the ‘fear premium’ that can expand depending on the perception that oil production could be cut off from Africa and the Middle-East.

Under this scenario, the attack on Saudi Arabia’s oil production and export infrastructure promotes (even now with President Trump ordering the sale of its 660 million barrels of the United States strategic oil reserves, to make up the loss of half of its oil exports from Saudi Arabia; 5.7 million barrels a day) the potential of seeing oil jump dramatically exists.

The brutal truth is Saudi Arabia’s oil-exporting industry entire oil production happens to be from its Saudi Aramco – one single entity and a great deal of oil through small geographical locations that make it quite vulnerable to planned attacks.

Most analysts are NOW predicting about a $5 to $10 spike in the price of oil, which would translate to around a $0.12 - $0.25 hike in gasoline prices per gallon. They are making this prediction based on the expectation…

·        The United States will sell enough of its strategic oil holding to keep the oil market from going berserk.

These assumptions are dangerous. The attack is not isolated rather it is an extension of the attacks we’ve seen in recent months on oil facilities and tankers in the Persian Gulf. The attacks are widening, and broader global oil terrorist based war is already specific.

The U.S. Strategic Petroleum Reserve will cover the shortfall for little more than 120 days. This means that if the Houthis and a myriad of other allied radical militia continue their attacks on Saudi Arabia and their Sunni allies’ oil production and export facilities, oil is likely to spike to well over $80 barrel. Oil spiked to as high as $71 a barrel in international markets before Trump’s announcement brought oil back to $66 a barrel.

Yes, the Russians will sell oil, but they have no interest in driving the price oil down. The need every U.S. dollar they can get their hands on after years of sanctions and low oil prices.

If “Deranged Donald’ attacks Iran, the war will become the third World War, and the fear premium will expand and drive oil to over a $100 a barrel. The war will include massive attacks on African oil exporters by ISIS, and Al Qaeda inspired Boko Haram and others. Iraqi oil exports are also likely to slow to a trickle in support of the Iranians. Attacks on U.S. military basis will increase exponentially. Oil hitting $120 a barrel will make Vladimir Putin a national hero and will have independents, and Democrats chanting ‘Deranged Donald’ and the U.S. and global economic growth go profoundly negative.

China, India, and Europe will try to broker a cease-fire especially if Hamas launches its 100 guided rockets into Israel. The most significant danger of this global oil war is ‘Deranged Donald’ using a single nuclear weapon. The use of even one nuclear weapon will mean $200 oil, and $5,000 gold. The moniker of ‘Deranged Donald’ will take on a new heinous meaning as he murders millions, perhaps tens of millions of people. The reality of this mentally ill, pathological narcissist will scare the perception of the United States by humanity for countless centuries.