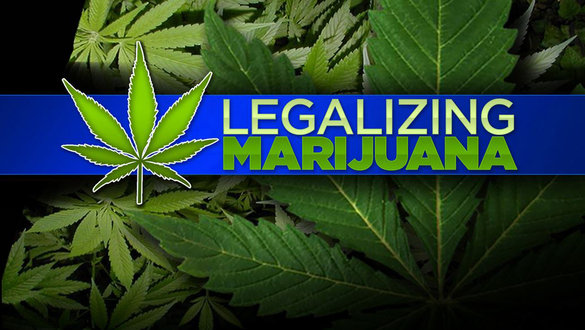 Democrats, many independents, and libertarians argue the legalization of marijuana is a racial justice issue.

Most of the GOP political analysts think House Democrats are taking a big gamble this month: voting to legalize marijuana at the federal level. The MORE ACT would remove the penalties for marijuana, erase some criminal records, and create grant programs for people hit especially hard by the war on drugs.

The lead sponsor of The MORE ACT, House Judiciary Chair Jerry Nadler (D-NY), says the bill would remove the penalties for marijuana, and calls for criminal justice reform. Nadler and his fellow Democrats on the Judiciary Committee have pushed the bill from committee limbo to a vote on the floor this month.

Anyone paying attention to the issue of the legalization of marijuana knows that support has been building for loosening marijuana restrictions all over the country over the last 20 years and that the most recent Gallup poll is showing 66% of Americans favor legalization, including more than half of Republicans.

Democrats behind the effort to legalize pot say with the upcoming election is absolutely the perfect time to present the bill. For one thing, with demands for racial justice reaching a fever with the murders of Breonna Taylor and George Floyd, The MORE ACT has seen a sudden burst of support to get a floor vote, which should win a majority.

Rep. Barbara Lee (D-CA), a co-chair of the cannabis caucus, was quoted as saying…

“You have sort of a convergence of all of these movements and issues and hype.”

“I think this is the perfect time to move it onto the floor [and] over to the Senate.”

But the vote to legalize marijuana comes with some risks. For example, it comes while the Democrats and Republicans are amid a stalemate between House Speaker Nancy Pelosi and the White House over a new coronavirus aid bill. The GOP could twist this as an effort to focus on marijuana instead of the pandemic.

Republican speakers at their National Convention mocked Democrats for declaring cannabis businesses essential enough to remain open during the early days of the pandemic and repeatedly ridiculed them for including a provision to give banks legal cover for serving the marijuana industry in their most recent coronavirus relief bill. Rep. Tom McClintock (R-CA), who cast one of two Republican votes in favor of the bill in the House Judiciary Committee last November for said…

“I do find it ironic that the only small businesses the Democrats seem to be worried about are cannabis shops. But I would support this bill whenever it is brought to a vote."

President Trump and his administration have, for the most part, chosen to ignore the growing public support for marijuana legalization, and President Donald Trump’s first Attorney General Jeff Sessions repealed protections the Obama administration created for states that legalized cannabis.

While Democratic presidential nominee Joe Biden doesn’t support legalization, he does back making medical marijuana accessible and removing criminal penalties for cannabis on the federal level. Sen. Kamala Harris (D-CA), however, is in full favor of the legalization of marijuana and is one of the key sponsors of the Senate version of the bill.

The Democrats, for their part, believe that if the House of Representatives voted to legalize marijuana, they are very likely to garnish a much bigger turn out many more young adults and black voters of all ages. This is because over 250,000 people remain in prison for nonviolent drug offenses at the state or federal level; the vast majority are African and Hispanic Americans.

They also recognize the issue is sweeping through the country as more states legalize medical marijuana, recreational cannabis, or both — at least four states will put recreational legalization on the ballot in November.

A recent report by the ACLU confirms African Americans are, on average, four times more likely to be arrested for marijuana possession than Caucasians. In some states, the ratio is as high as 10 to 1 — even though studies have shown they use the drug at comparable rates.

“We always had the intention of doing this…but the increasing consciousness of the ... Black Lives Matter movement also helped a great deal.”

But some pollsters say the House vote could muddle the party’s message with just weeks to go before Election Day, especially considering that Biden isn’t on board with blanket marijuana legalization.

Jon McHenry, a Republican pollster with North Star Opinion Research, however, says Democrats are harming their ability to defeat Donald Trump, insisting that this shows that…

“Joe Biden's not going to be in control. Nancy Pelosi and Alexandria Ocasio Cortez are in control.”

Jonathan Thompson, executive director of the National Sheriffs’ Association, has been quoted as saying the pandemic, civil unrest, and enacting a federal budget are among the more pressing issues for Americans at the moment….

“You're telling me that legalizing marijuana is a higher priority than all those things?”

House Democrats argue that they passed coronavirus legislation the Heroes Act in May and Senate Republicans are to blame for the holdup in additional aid. They insist that passing this bill now will prove to voters what kinds of progressive legislation the Democrat party can pass and help propel them to take back the Senate.

“It'll become an issue that the Republicans couldn't bring it up, and then you gotta have a Democratic majority to get it to a vote.”

There are also tens, perhaps hundreds of billions of dollars in business revenues a year to be had with the legalization of marijuana. Republican Senators Cory Gardner of Colorado, Susan Collins of Maine, and Dan Sullivan of Alaska are all in tough races in states where marijuana is already legal, and passing a Federal law would open up access to marijuana businesses to legally bank. In Arizona and Montana — where incumbent Republican Sens. Martha McSally and Steve Daines could also lose their seats — legal weed is on the ballot this November.

“I think this is going to be brought up in all these contested Senate races.”

According to his campaign, former Vice Biden believes that “no one should be in jail for using marijuana.”

Biden supports removing criminal penalties and expunging past records, but wants to move marijuana from Schedule I to Schedule II of the Controlled Substances Act. The Controlled Substances Act is a list of all federally banned substances which became law in 1970, and it has five tiers, or “schedules.” Schedule II drugs like cocaine and methamphetamines are deemed to have a medical use, but high potential for abuse; all of that, of course, would go out the window if the MORE ACT is passed.

In addition, while the Democratic National Committee adopted Biden’s position on cannabis, advocates reason now that the former VP's platform is essentially in line with the MORE Act, arguing that both want to remove criminal penalties, expunge records and let states decide how to legalize further.

“He supports ‘decriminalization,’ right?” “Where we conflict with Biden is his consideration of rescheduling. Technically, on the federal level, decriminalization is what the MORE ACT … is doing.”

But Kevin Sabet, president of the anti-legalization group Smart Approaches to Marijuana, insists the criminal penalties for marijuana use can be eliminated without turning it into a massive, for-profit industry….

“A lot of people are going to be benefiting from this that are not people of color or poor communities,”

“The poorest communities are going to suffer as a result of this. Ask anybody living in a poor community if they think they need more things like liquor stores or pot shops.”

Sabet, of course, ignores the 4 to 1, even 10 to 1 disparity of prosecution of African Americans versus Caucasians for marijuana use. He also ignores the potential hundreds of billions of dollars of business legalization means and the reduction of people being incarcerated at great expense for marijuana use.

Rep. Elaine Luria (D-VA) squeaked out a three percentage point win in a district in 2018, which Trump won two years before. While she is up for re-election this year, she isn’t worried about how voting for cannabis legalization could affect her campaign. Luria points put that

“All three candidates in my race have the same position on [legalization],” who is running against former Republican Rep. Scott Taylor and independent David Foster. Luria beat then-incumbent Taylor in the 2018 election. “I think we need to show that we want to take action on this as a priority.”

While it’s unlikely the Republican-controlled Senate will pass the MORE ACT if it chooses to bring the bill up for a vote and it fails, the GOP may find 4-8 of its GOP members break ranks and vote for the bill’s passage. More likely, the bill will be passed if Vice President Biden wins in November. There’s a multi-billion dollar Marijuana lobby that has unusually strong support from the banking industry to legalize marijuana.

House of Representatives to vote on decriminalizing marijuana nationwide