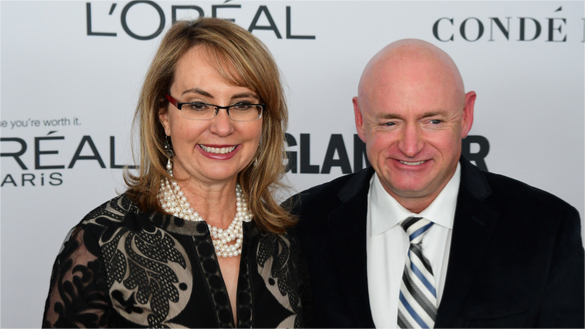 Heroic former astronaut and husband of former Congresswoman Gabby Giffords has the right stuff to win Senate seat in 2020. Mark Kelly could be the perfect and strongest candidate to gain the Senate seat for the Democrats in 2020.

Retired astronaut, Mark Kelly, announced today via a short video with his wife former Congresswoman Gabby Giffords recounting that difficult period in their lives and Giffords' rehabilitation from the gunshot wound...

"But what I learned from my wife is how you use policy to improve people's lives."

The couple then announced they were damning the torpedoes and going full speed ahead on a new mission… they are winning next year’s special election in Arizona, which will fill the final two years of the late Sen. John McCain’s unexpired term.

Kelly made his case for being elected to the Arizona Senate by asserting...

In his campaign announcement, Kelly expertly straddled both the position of being a pragmatic centrist focused on progressive issues like climate change, affordable health care, the need to end wage stagnation and enhance job and economic growth for Arizonians.

The recruitment of Mark Kelly is a major coup for the Arizona Democratic Party. Mark Kelly is well recognized by the voters of Arizona for his steadfast loyalty and love of his wife, former Congresswoman Gabby Giffords, who was a victim of deranged gunman Jared Loughner, who at the age of 22, opened fire on January 8, 2011, during a “Congress on Your Corner” event hosted by the Congresswoman outside a Tucson-area supermarket killing six people including U.S. District Judge John Roll before being wrestled to the ground. Giffords and 12 others were wounded.

Mark Kelly and his wife have been steady advocates for gun safety and eliminating the existing loopholes that exist in gun background checks, but have at the same time qualified themselves as gun rights advocates.

Mark Kelly, 54, was a Navy combat pilot deployed during the Gulf War, flew 39 combat missions and went on to fly his first mission into space as a NASA astronaut in 2001. He completed three more missions, spent more than 50 days in space and lived on the International Space Station before retiring from NASA in 2011. Kelly has an identical twin brother, Scott Kelly, who is also a retired NASA astronaut who spent an unprecedented year on the ISS.

"We've seen this retreat from science and data and facts.

“I will reject any corporate PAC money.

"Our fight to improve our gun laws and my commitment to tackling climate change and ending the outrageous influence corporate money has on our politics means there are a lot of powerful interests who want to stop us,"

Mark has a high and extremely positive headline. His eloquence and intelligence come shining through. He’s a marquee Senate Candidate that perfectly fits the mood and culture of Arizona. His announcement for the Arizona Senate seat gives the Democratic Party a better chance of winning the control of the Senate and the White House in 2020.