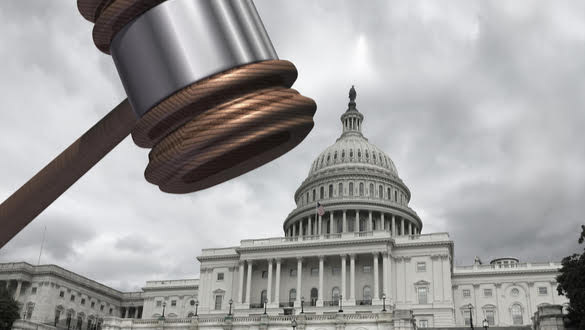 Speaker Pelosi was urged by a group of moderate Democratic House members to seek to approve the bipartisan infrastructure package before moving on to work on the Senate's budget reconciliation bill.

Voting on Biden's trillion-dollar domestic agenda was postponed until Tuesday.

A deal with the leaders of a 10-member centrist bloc is demanding a vote on the bipartisan infrastructure bill be passed by the Senate before considering a budget resolution.  That paves the way for a $3.5 trillion spending plan to expand social support programs and combat climate change failed late on Monday night after hours of negotiations with the Speaker of the House.

All night Monday, Democratic leaders kept House members in suspense about whether or not there would be a vote on a procedural rule setting up floor debate. Parameters for consideration of the budget resolution, the bipartisan infrastructure bill, and a measure to restore a portion of the Voting Rights Act struck down by the Supreme Court the previous year.

It wasn't until after midnight on Tuesday that Democratic leaders announced that the rule would not be considered until noon the following day.

According to Pelosi, Democrats will strive to complete work on the bipartisan infrastructure bill and a $3.5 trillion spending plan to expand social safety net programs by Oct. 1, according to remarks made over the weekend. Surface transportation programs will also expire on that date, providing an additional incentive for lawmakers to send the bipartisan infrastructure bill to Vice President Biden's desk before then.

On the other hand, conservatives are adamant about voting first on the bipartisan infrastructure bill and want a more definitive commitment.

When asked if there had been any discussion about setting a more specific date for voting on the infrastructure legislation, Pelosi remained mum on the subject.

"We'll see what happens tomorrow," Pelosi told reporters as she walked out of the Capitol shortly after midnight.

House Democrats will gather for another caucus meeting on Tuesday morning, followed by a briefing with officials from the Biden administration on the tumultuous U.S. military withdrawal from Afghanistan.

The House Democratic leadership and Pelosi's team pleaded with rank-and-file members, mainly centrist holdouts, to unite behind a new strategy to advance Vice President Joe Biden's "Build Back Better" agenda, which she described as a once-in-a-generation opportunity.

Because the rule would automatically deem the budget resolution as having been adopted, the House would not be required to take a separate individual vote on it under that strategy. As a result, there would be no separate roll call vote on adopting the budget before the House votes to send the bipartisan infrastructure bill to the Senate, which would save time.

According to a source in the room, Pelosi told her colleagues, "It is unfortunate in my opinion that we have to discuss the process when we want to discuss policy."

Right now, we have an opportunity to pass something so significant for our country, something so transformative that we haven't seen anything like it before... We cannot afford to waste this majority or this Democratic White House by failing to pass the necessary legislation."

If all Republicans are united in opposition to a measure, House Democrats can only afford three defections on any given vote.

Decades ago, Nancy Pelosi declared that the House would not vote on the bipartisan infrastructure bill, which had been negotiated by Congress and the White House, until after the larger, Democratic-only $3.5 trillion spending plan had been completed.

Liberals in the House, who make up a large majority of Pelosi's caucus, have sided with her in demanding that the lower chamber secure its priorities in the $3.5 trillion package before taking action on the infrastructure bill.

Moderate Republicans led by Rep. Josh Gottheimer (D-NJ) announced shortly after the Senate passed the bipartisan bill earlier this month that they wanted to see a victory on that measure as soon as possible rather than waiting until the next election.

"Time is the enemy of deals," nine centrist Democrats warned in an op-ed published Sunday night in the Washington Post.

A new member was added to the group on Monday when Rep. Stephanie Murphy (D-FL), a leader of the Blue Dog Coalition, wrote an op-ed for the Orlando Sentinel in which she stated, "I cannot in good conscience vote to begin the reconciliation process until we have completed our work on the infrastructure legislation."

The House of Representatives had been scheduled to be in recess throughout August. Still, Democratic leaders summoned members back this week for what is expected to be a two-day session to adopt the budget resolution, which will allow committees to begin writing the $3.5 trillion spending bill.

As part of their efforts to honor the late Rep. John Lewis (D-GA), Democrats will introduce legislation named after him that would reinstate a provision of the Voting Rights Act that would require localities with a history of voter suppression to obtain approval from the Justice Department before making changes to voting laws. That legislation is expected to pass quickly, thanks to widespread Democratic support.