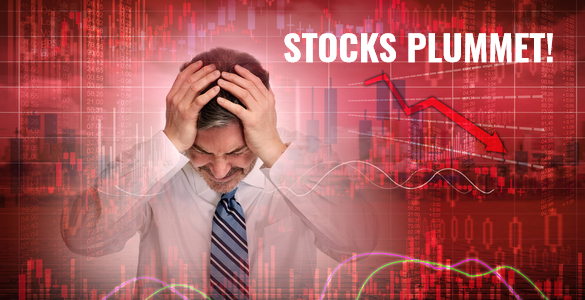 The nose-dive on Wall Street we see today on Wall Street may result in a bounce either later in the day or on “Turn Around Tuesday,” but that’s not a reason to go long. I’m sorry, but all of my charts, economic training, and experience are telling me that any bounce we see will be short-lived, and we are looking at a market meltdown that will match the October 1987 stock market crash that culminated in a 31.5%.

The difference between this crash and the one we experienced in 1987 to the world is:  the United States is flirting with a recession and contending with the spread of the most dangerous viral outbreak since the Spanish Flu, that’s mutating.

In other words, while I expect a bounce tomorrow, and even on Wednesday driven by former Vice President Biden’s victories in Mississippi, Missouri, Michigan, and perhaps even Washington State, this correction is little more than half done. Further, the recovery will not be a V-shaped recovery for the Dow Jones, S&P, and NASDAQ. Correction of more than 20% will put the U.S. stock market squarely in a “bear market,” and as such, we are now in a stock pickers market.

The oil price war between Saudi Arabia and Russia will not last long since it may send oil down to $20 a barrel.  Russia needs $42 oil just to keep its economy from setting off a third Russian revolution. Further, a collapse of oil to $20 will force the murderous Crown Prince Saudi Crown Prince Mohammed bin Salman to slaughter tens of thousands to prevent his regime from being overthrown. He just fended off a coup attempt in the last several days.

President Trump is not smart enough to handle the international and domestic issues that will cause this brutal stock market crash. His constant lying and misrepresentations about the coronavirus could produce a blue tsunami in November. Flipping the Senate and expanding the House majority thanks to the $1 to $2 billion political spendings of Michael Bloomberg.

Of great concern is how many people may suffer between now and election day around the world because of the coronavirus. A former head of Homeland Security with an extensive background in responding to epidemics is predicting as many as 96 million people will be infected with the coronavirus, and 500 million will die from it.

If all this misery isn’t enough to destroy the GOP for a generation, Trump’s assertion on camera that he intends to cut Social Security, Medicare, and other entitlements. Trump and the GOP can kiss Florida goodbye for a generation if Joe Biden pledges Castro stole reparation to Cuban’s who can document their property in 1959-1963.  The balance of Puerto Ricans versus Cubans has dramatically shifted to the former, and that will further seal the shift. Trump is being vilified by the Puerto Rican community here in Florida.