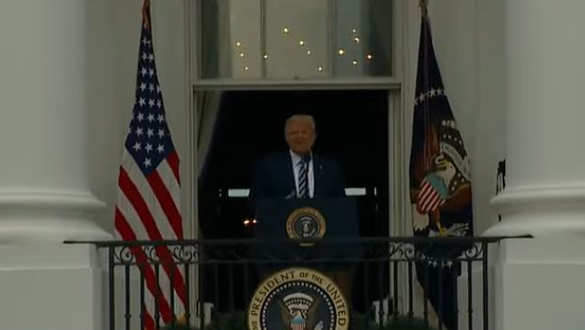 When was the last time President Trump gave an 18 minute speech at a campaign event? Today he held another super spreader event at the White House. Many who attended the campaign wearing masks, but few practiced social distancing.

President Trump is still infected with Covid-19, and while he tried to hold a campaign event at the White House today, it was clear he doesn’t have the stamina he had before he became infected with the coronavirus. Spewing so much hate, blame, and lies and misrepresentations Trump forced CNBC host Alex Glick to be forced to cut away from the event.

The rally crowd was set back from the balcony where Trump appeared. Attendees had their temperatures checked and were told to wear masks, according to the White House. More than 2,000 people were reportedly invited to the event but fewer turned up.

The President’s short speech confirms the belief by many physicians that he is still infected with the coronavirus and refutes his claims of being cured of the coronavirus amounts to another deadly lie. Many experts in the field of viral medicine and pomologist like Dr. Gupta in Seattle insist that the experimental treatment given to Trump at Walter Reed makes absolutely no sense. The treatment has been given to just ten people as of yesterday.