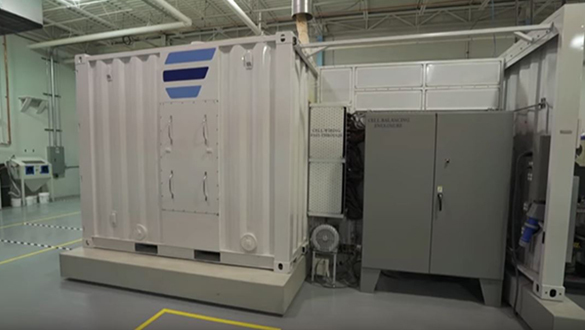 The Wall Street Journal published an article today on an amazing startup company that claims it has developed a new battery technology that uses iron, water, and air to store enormous amounts of electricity inexpensively. The company claims it has three prototypes that could potentially end the age of oil, gas, and coal.

There are literally thousands of scientists and engineers worldwide working for decades to develop a long-lasting inexpensive battery. The goal is to create a battery capable of storing an enormous amount of electricity and could revolutionize the power grid by supplying an almost limitless amount of energy at a fraction of the cost of the same amount of energy costs to generate using fossil fuels.

This morning the Wall Street Journal published an eye-opening, jaw-dropping article on Form Energy, a four-year-old startup located in Somerville, Mass. They say it has built what it claims is a battery that can discharge power for days using one of the most common elements on Earth: iron.

While the company concedes its new batteries are far too heavy for electric cars, the company does insist that these new batteries will be capable of solving one of the most elusive problems facing renewable energy like wind and solar; cheaply storing large amounts of electricity to power grids when the sun isn't shining and the wind isn't blowing.

Form Energy isn't a penny stock long on hype and short on credibility. Form Energy's financial backers include an impressive list of some of the world's most successful technology investors and funds.  They include Breakthrough Energy Ventures, a climate investment fund whose investors include Microsoft Corp. co-founder Bill Gates and Amazon.com Inc. founder Jeff Bezos. Form recently initiated a $200 million funding round, led by a strategic investment from steelmaking giant ArcelorMittal SA, MT -0.60%, one of the world's leading iron-ore producers.

Unlike many other companies, Form Energy that tout and pump their soon to be realized technologies have kept an extremely low profile; its research has long been shrouded in secrecy and nondisclosure agreements.

The company has only very recently started to share its progress with The Wall Street Journal, saying it wants to make regulators and utilities aware that if all continues to go according to plan, its iron-air batteries will be capable of affordable, long-duration power storage by 2025.

While the technology is breathtakingly exciting, it's also a technology that may, in fact, be ready for use in the next 3 years. According to the company's chief executive officer, Mateo Jaramillo, its 2025 target is supported by the fact that the company is already preparing to start manufacturing the "kind of battery you need to fully retire thermal fossil fuel assets like coal and natural gas" power plants. Jaramillo has a tremendous amount of credibility and experience, having proven himself by developing Tesla Inc.'s Powerwall battery and worked on some of that company's earliest and revolutionary automotive powertrains. In other words, he has already proven he can make the impossible possible.

On a recent tour of Form Energy's windowless laboratory with reporters from the Wall Street Journal, Mr. Jaramillo gestured to barrels filled with low-cost iron pellets as its key advantage in the rapidly evolving battery space. Its prototype battery, nicknamed Big Jim, is filled with 18,000 pebble-size gray iron pieces, an abundant, nontoxic, and nonflammable mineral.

Iron pellets that fill the battery are abundant and inexpensive and could hold electricity for days or even weeks, according to Form Energy's Mr. Jaramillo, who credits the key acquisition of the battery cathode from NantEnergy as a tipping point in the technological leap he insists Form Energy has accomplished.

The leap of developing a battery that requires Iron as opposed to the lithium-ion battery cells, the current workhorse of electric vehicles and today's grid-scale batteries, along with the nickel, cobalt, lithium, and manganese minerals used, currently cost between $50 and $80 per kilowatt-hour of storage, according to analysts, is a game-changer.

According to Form Energy, using iron should reduce the cost of storing energy to less than $6 per kilowatt-hour for each cell.  When packaging the cells together into a full battery system, Form Energy expects the total cost will raise the price to less than $20 per kilowatt-hour, a level at which academics have said renewables plus storage could fully replace traditional fossil-fuel-burning power plants.

"A battery capable of cheaply discharging power for days has been a holy grail in the energy industry, due to the problem that it solves and the potential market it creates."

"Regulators and power companies are under growing pressure to deliver affordable, reliable, and carbon-free electricity, as countries worldwide seek to reduce the greenhouse-gas emissions linked to climate change. Most electricity generation delivers two out of three. A long-duration battery could enable renewable energy—wind and solar—to deliver all three."