Coronavirus Realized in New York City? Not If But When! 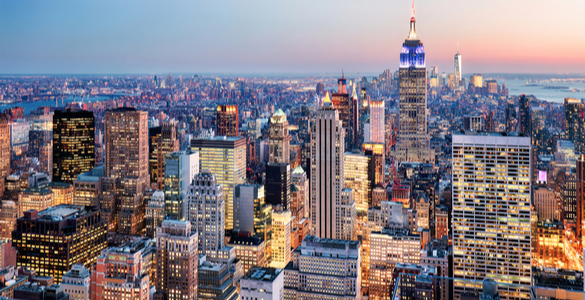 The New York Daily News claims ‘Clusters people are quarantined and being monitored cross the State of New York.’ Full fledge proof of cases in New York will shut down Wall Street and disrupt the world’s financial markets.

The world’s number one melting pot, New York City, has a resident who arrived back from Italy tested for the highly contagious coronavirus that appears to be spreading geometrically across the globe.

Suburban New York officials from Long Island and Westchester Counties (just north of NYC) have clusters of patients that are being monitored for the coronavirus. A great many people who work on Wall Street live in the city and also in both suburbs. Frankly, it's only a matter of time before the first viable COVID-19 diagnosis is anounced in New York City and then watch for the reaction of Wall Street.

New York City still hasn’t a confirmed any cases of the potentially deadly virus, but there’s a great deal of fear given the city’s a central world hub of business, fashion, communications, food, arts, sciences, diplomacy, sports, etc. that brings approximately 65 million people a year into the city, including daily commuters from over 50 miles away.

News of the possible case in NYC came via Twitter from The New York City Health Department announcing Thursday, “a person reported symptoms and had recently traveled from Italy.” The U.S. Center for Disease Control and Prevention will test the patient for the virus.

According to Associated Press, the global count of those who have contracted the virus hovered around 82,000 on Thursday, with 433 new cases reported in China and another 505 in South Korea, but there is a growing concern raised that the Chinese are withholding the real numbers for domestic political reasons.

Nassau County health officials informed reporters that they’re monitoring 83 people who are being isolated in their homes. Yesterday, the county announced it had tested six people so far, and all have come back negative. Suffolk County is monitoring 29 cases.

The Test Kits May Not Be Working

At the beginning of this week, Mayor de Blasio asked the federal government to increase surveillance of travelers coming through the areas through the three international airports in and across from the city. The mayor also requested more face masks and let the city health department test suspected cases itself. The CDC, being hit with Trump budget cuts and losing funding to Trump’s Southern Wall, sent out faulty test kits to some states. Only a dozen state and local health departments have been able to conduct tests themselves.

Nancy Messonnier, director of the CDC’s National Center for Immunization and Respiratory Diseases, was quoted as saying…

“I am frustrated like I know many of you are that we have had issues with our test. I want to assure you that we are working on modifying the kit and hope to send out a new version to state and local jurisdictions soon.”

Deaf to Trump’s claim of doing a great job in managing this possible pandemic. Health experts across the country have been blasting President Trump’s preparedness and cutting critical ongoing efforts to prepare for the next global health crisis.

The Key is Preparedness