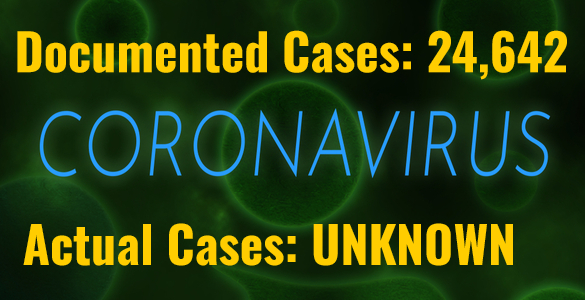 China’s Health Commission reported today that 65 more people died yesterday and that 3,887 more people had been diagnosed with the viral infection. The official count of those infected now stands at 24,642 but there are accusations that the count  severely under estimates the actual numbers.

Health experts say the death toll from the Wuhan Coronavirus is likely to rise sharply in the next few weeks but are cautiously optimistic that the mortality rate of the virus will hold at the 2% that has been far lower than SARS, which has a mortality rate of about 10%.

Experts are still warning that they lack enough data to say definitively how contagious and lethal this new Coronavirus is. Many residents in Wuhan, the epicenter of the outbreak and the capital of Hubei Province, believe both the death toll is much higher than official reports because people with flulike symptoms are being turned away by overwhelmed hospitals.  The health care system in Wuhan severely lacks enough health workers and testing kits to diagnose and document accurately all the active cases of the virus.

The reality that there may be as many as 100,000 cases worldwide has prompted the Trump administration to order the evacuation Americans who had been in Wuhan as the outbreak worsened. Hundreds arrived in California on Wednesday on two evacuation flights arranged by the United States government that represents a second wave of American evacuations after an earlier flight arrived last week.

All those being brought home are spending 14 days in quarantine on military bases as part of a strict and highly unusual protocol imposed by Trump Administration officials with the intent of slowing the spread of the outbreak.

Among those Americans Among the passengers on the evacuation flights were two sisters and a niece of Guanettee Colebrooke, a Junior Reserve Officers’ Training Corps instructor in suburban Washington.

“…she was prepared to welcome them to her home in Virginia whenever they might be allowed to leave quarantine…They feel so sad that there are so many people who are unable to be evacuated,”

Ms. Colebrooke went on to say… Her sisters made a simple calculation:

The Chinese equity markets were steady after the government and its central bank injected cash and emergency regulatory relaxation to prevent the country’s and Hong Kong stock markets from taking a bigger nose-dive. How long these measures will work may be dependent on how many people ultimately are infected with the Coronavirus, die from the deadly infection and how much longer the 50 million people quarantined in China remain immobilized from travel.