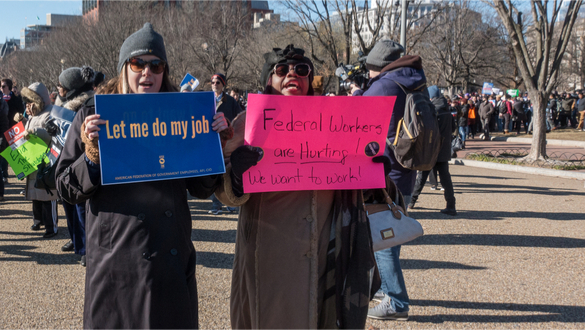 IRS union leaders are making preparations for a dramatic increase in worker sickouts as part of coordinated labor protest. The move is a glimpse of what could become a massive sickout by TSA, Air Traffic controllers and law enforcement that will focus on safety and security dangers created by President Trump’s partial government shutdown.

The danger of a massive protest by government workers is building. Union leaders for Internal Revenue Service workers announced Tuesday they expect worker absences to surge as part of a coordinated protest that could slow the government’s ability to process tax refunds on time.

President Trump ordered an estimated 30,000 IRS workers back to their jobs last week to process refunds without pay. However, The Washington Post is reporting that IRS employees across the country— many already coordinating a stay at home protest, others forced to stay home out of financial necessity—won’t be coming into work, according to Tony Reardon, president of the National Treasury Employees Union (NTEU), and several local union officials.

Hundreds of IRS employees have already received permission not to come to work during the partial government shutdown due to financial hardship. Many can’t afford the gas, child care and other necessities that would allow them to come to work.

The IRS union is signaling, however, a much bigger problem ahead with civil servants. The prospect of federal workers including TSA, Air Traffic Controllers, and other federal employees walking off the jobs to protest the safety and security dangers is going to grow exponentially if they go through a second pay period without being paid.

Tony Reardon of the NTEU went on to say during his announcement to speak of his union that represents 150,000 employees at 33 federal agencies and departments’ members...

“They are definitely angry that they’re not getting paid...”

“... These employees live paycheck to paycheck, and they can’t scrape up the dollars to get to work or pay for child care.”

Meanwhile, President Donald Trump complained this morning in a conference call with an estimated 900 activists in attendance that the existing barriers along the Mexico border need to be replaced because they are “rusted” and “disgusting.”

The President’s comments are likely to do further damage to his efforts to get $5.7billion to build the wall he promised Mexico would pay to construct, during his 2016 election campaign.