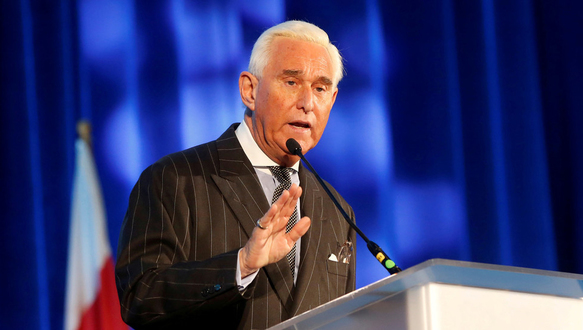 President Trump’s longest acting political advisor and convicted felon, Roger Stone, wants him to rip up the U.S. Constitution and ‘Declare Martial Law’ and seize power even if he loses the election.

The U.S. Constitution is explicit. Donald J. Trump’s last day in the office as President of the United States is January 21, 2021, if he loses the general election in November. This means that any declaration of martial law could be ended by President Joseph Biden that day; Trump cannot use the declaration of martial law to extend his term in office.

Roger Stone’s rationalization comes down to the same as the one President Trump is using in every stump speech and news interview -- the election already corrupt and fixed to guarantee his defeat even though he can’t possibly lose the election. That’s how it works in Russia, Belarus, and other authoritative regimes.

According to Roger Stone and President Trump, the only election result that on November 3, 2020, that could possibly be “legitimate if the “real winner” — Trump — takes office, regardless of what the votes say. Stone argues that a loss would be justification for Trump to use force to take over the nation.

Roger Stone worked as an adviser in the last Trump campaign and is believed to be a conduit of communications between Russia and his campaign in 2016.  Stone made this astonishing admission to create an American Dictatorship on Thursday during an interview with far-right conspiracy theorist Alex Jones host of the internet based InfoWars program. Alex Jones is famous for declaring the slaughter of children in Newtown, Connecticut, a phony staged event.

The Stone and Jones interview discussed what they call an ongoing “coup” against Trump, and Stone inexplicably claimed that he predicted, “almost three decades ago that this moment would come.” He’s famous for arguing that Richard Nixon was innocent and should never have resigned.

During the interview, Stone made it clear he’s resigned to Trump losing the upcoming election — and is following the President’s but blamed it on the baseless claim that early voting has already been “corrupted.”

To safeguard Trump’s re-election, Stone called for the President to use federal authorities to seize the mail ballots in Nevada and to use FBI agents to physically block certain (Black, Hispanic, Independent and Democrat)  voters from casting their ballots.

Stone also wants Trump to use his martial law powers to order the widespread arrests of his political opponents to solidify his power, first reported by Media Matters.

During the Alex Jones interview with Stone, the President’s sycophant said…

”Under martial law and the Insurrection Act, Trump would have the “the authority” and power to arrest Facebook CEO Mark Zuckerberg, Apple CEO Tim Cook, “the Clintons” and “anybody else who can be proven to be involved in illegal activity.”

Stone also called for the immediate arrest of James Mattis, his former Secretary of Defense, for “sedition,” apparently because he is quoted as saying Trump was unfit for office, according to Washington Post journalist’s to Bob Woodward’s upcoming book, “Rage.”

Stone also advocated for the arrests of journalists…

“If the Daily Beast is involved in provably seditious ... acts” in a new Trump future, their “entire staff can be taken into custody and their office can be shut down.” “They want to play war; this is war,”

Besides demanding that “the ballots in Nevada on election night should be seized by federal marshals” and not counted, claiming with absolutely no evidence that “they are completely corrupted.”

Harvard law professor and Constitutional expert Laurence Tribe,  warned that Stone’s “advocacy of totalitarian takeover by Trump has to be taken seriously.” Stone and Trump are likely speaking with each other and, as a result, has his ear and influence to push the President into trying to pull off this off-the-rails suggestion. 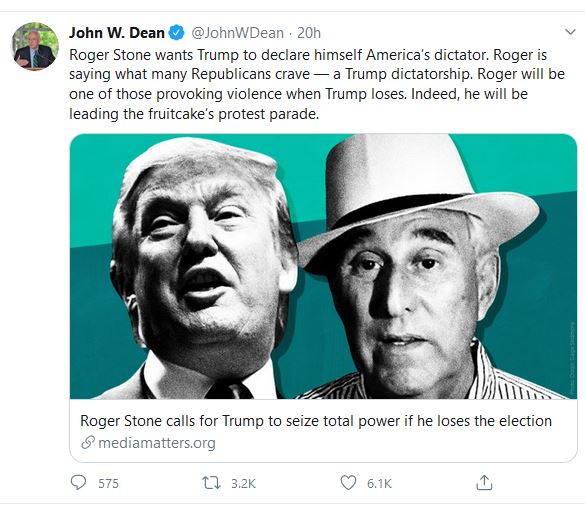 Thanks to a commutation of his prison sentence by President Trump in July, Roger Stone dodged 40 months in prison. Roger Stone was convicted of seven federal felonies, including lying to Congress and witness tampering in the investigation into Russian interference in the 2016 presidential election. Alex Jones hilarious referred to Roger Stone during his interview with the felon as “almost a political prisoner.”

Trump commutes Roger Stone's sentence. Here's why he did it - 2 Months Ago