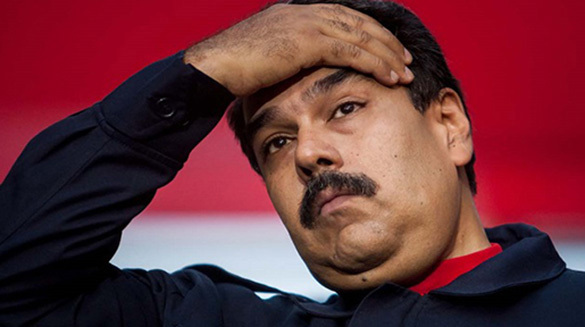 WallStreetRebel.com (Boca Raton, Florida) The desperate economic conditions in Venezuela have been going from bad to worse even though Venezuela possesses the largest oil reserves in the world, and the price of oil has now climbed towards $70 a barrel. Some argue the reason for the economic decline of the country is tied to its socialist economy. The reality is the country, under both Hugo Chavez and now, his chosen heir Nicolas Maduro has become one of the most corrupt governments in the world.

Venezuelan President Nicolas Maduro has changed the country’s Constitution and all but eliminated his political enemies from any role in the country. While Maduro has given long speeches about socialism, he has instead governed like a dictator. As a result, the apparent assassination attempt that took place on Sunday can’t have come as a surprise to anyone keeping track of the internal events in Venezuela.

On Saturday, while Maduro was giving a public speech with thousands of his nation’s military troops watching in parade formation, a yet to be determined number of drones armed with explosives detonated in an attempt to put an end to him, his wife, and a large number of the county’s corrupt military and civilian leaders.

The visibly shaken head of state said he saw a “flying device” that exploded before his eyes. He thought it might be a pyrotechnics display in honor of the event, but then Maduro later said in an impassioned retelling of what occurred that “This was an attempt to kill me.” And later repeated the claim, “Today they attempted to assassinate me.”

According to Venezuelan Information Minister, Jorge Rodriguez, the incident took place shortly after 5:30 p.m. as Maduro was celebrating the National Guard’s 81st anniversary. When the explosions took place, pandemonium ensued, and Bodyguards escorted Maduro out of the event as television footage showed uniformed soldiers standing in formation quickly scattering from the scene.

Maduro, addressing the Venezuelan people after the attack, insisted he saw a “flying device” explode in front of him during his speech. He went on to assert that his government had already captured some people responsible for the drone attack, whom he referred to as “material authors” then proceeded to blame the alleged assassination attempt on Colombian President Juan Manuel Santos and those on the far-right of Colombia and Venezuela’s political spectrums.

Maduro went on to claim that a preliminary investigation showed that the people behind the attack live in Florida, and called on President Donald Trump for help in prosecuting them. According to the Washington Post’s translation of Maduro’s speech following the attempt on his life...

“Already, the first investigations show that those intellectually, and financially responsible for this attack live in the United States of North America.

“I hope the government of Donald Trump is willing to combat terrorist groups that want to attack presidents of peaceful nations.”

However, an anti-Maduro group known as Soldados de Franelas (Soldiers in t-shirts) claimed responsibility for the assassination attempt on Twitter.

The group, in a series of tweets, said it planned to fly two drones “loaded with C4” to the presidential box, but before it could reach Maduro they were shot down by snipers guarding the Venezuelan strongman.

However, AP reporters were able to interview three fire officials who insisted on speaking only under the condition of anonymity claiming they believe the explosions that took place were not caused by drones but in fact, were caused by a gas tank explosion in a nearby apartment. Supporting their assertion, there is a video of smoke rising from buildings near the speech’s venue.

Maduro has good reason to be paranoid; many analysts don’t believe his regime will survive in power much longer. His government has routinely accused opposition activists, Columbia and even the U.S. government of plotting attacks to overthrow Maduro. His recent election to a new term in office has been decried by dozens of nations as a fraud and blatant trampling of democracy.

WallStreetrebel.com believes that the Maduro regime is living on borrowed time and will not survive the year. We fully expect a military government to take control of the country and to reach out to the world community with a plan to re-introduce a democracy so it can gain economic assistance. Even with international resources and reinvestment, the flow of oil from its ruined oil infrastructure may take years to become a major oil producer.