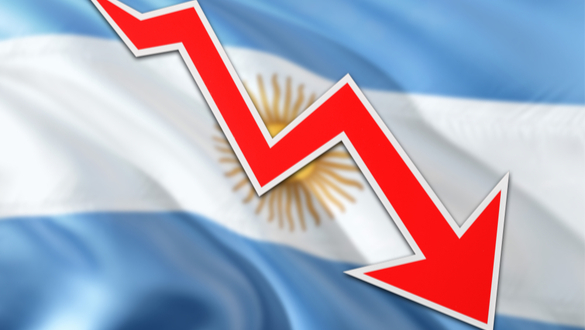 Argentina’s historic market collapse has sparked fears that South America’s second-largest country is on track for yet another default. The Argentina stock market has fallen more than 48% in dollar terms in one day recently. That marked the second-biggest one-day nosedive anywhere in any stock market in the world since 1950.

After the recent Argentina financial meltdown, its government has been forced to impose several capital control measures for halting the current foreign currency reserve slump. The country is currently facing a high likelihood of defaulting on its loans.

President Trump, while running as a candidate said he might be willing to allow because he would be able to negotiate a big reduction in outstanding debt with both foreign and domestic creditors. Trump’s comments were considered insanity by knowledge people at the time because of the myriad of consequences of a default. Argentina is now giving us a front-row seat of what an impending default is like.

The Argentinian Central Bank has enforced a 5-day limit for all exporters to start repatriating foreign currency. Institutions will now require the bank’s authorizations for purchasing dollars in the FX market for their savings as per a statement issued by the bank. Argentinian citizens are currently limited to making dollar purchases not more than around $10,000 per month.

This announcement is the latest measure in the fight against Argentina’s worsening economic crisis. Over $3B worth of Argentinian FX reserves were drained out on Friday and Thursday alone with the government struggling to repay its short-term liabilities and slow down the peso’s value from falling further. Argentina is likely to exhaust all its foreign reserves in a matter of weeks if the current pace of foreign exchange drain goes unchecked. 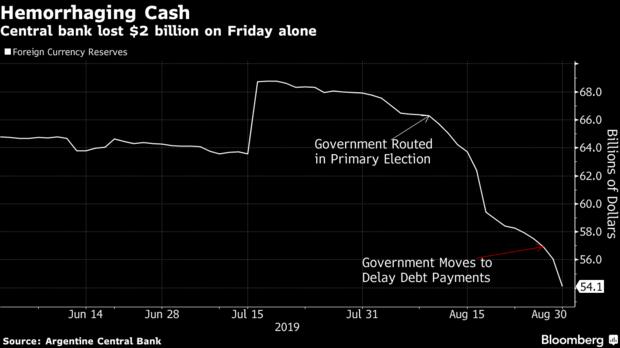 The Argentinian peso fell by over 25% during last month as the country’s primary elections showed that the current government, which had a market-friendly stance, had no chance of coming back for another term in the polls to be conducted in October. Interest rates have skyrocketed as the Argentinian central bank attempted to start rolling over debt, which culminated on Wednesday with the decision to start delaying payments on over $7B worth of bills that would be coming due in 2019.

The opposition has called for stringent currency control measures, arguing that the country was in a state of virtual default. Reserves held by the Argentinian central bank fell to around $54.1B from $66.4B on the day before the primary elections.

The imposition of these currency control measures is bound to be embarrassing for President Macri, elected three years ago, who had come to power promising to liberalize the economy, which had been battered by years of repeated state intervention. Although funds had initially flooded in, expanding current account and fiscal deficits started worrying investors last year, which led to the peso’s value crumbling ever since.

Given the certainty of a defeat during the October polls, Macri has now given up his efforts for retaining investor confidence. He is now imposing measures; he had criticized when his predecessors had imposed them.

Along with delaying maturities on several short-term liabilities on August 28, Argentina stated that it would be asking holders of long-term debt worth over $50B to start accepting voluntary re-profiling measures. It will also start renegotiating payments to be made on over $44B it had loaned from the IMF.