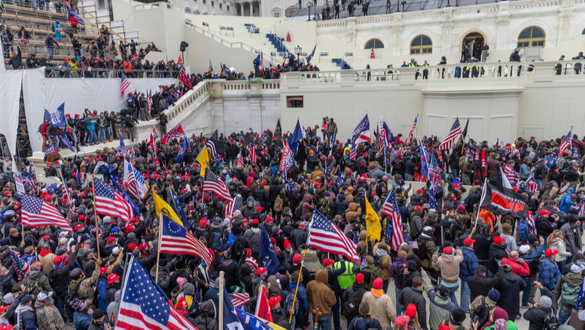 In a court filing on Tuesday, the United States Justice Department stated that it would not defend Republican Congressman Mo Brooks in a lawsuit alleging that he conspired to incite the riot at the United States Capitol on January 6.

The reluctance of the United States Justice Department to defend a Republican congressman who has been charged in a civil complaint with aiding and abetting the January 6 assault on the Capitol may jeopardize former President Donald Trump's legal defense in the same case, analysts have said.

Brooks' argument that he was operating within the scope of his job was likewise rejected by the Department of Justice on Tuesday, and the department asked that he not be given immunity.

The submissions by the Department of Justice and the House Counsel are not legally enforceable, and a court may still find that Brooks was operating within the extent of his job and grant him immunity.

The submissions by the Department of Justice and the House Counsel are not legally enforceable, and a court may still find that Brooks was operating within the extent of his job and grant him immunity.

The Department of Justice informed a federal court late Tuesday that it had denied Representative Morris "Mo" Brooks' request for immunity under the Westfall Act, which protects federal workers from being sued for their statements or actions while on the job.

When the court cautioned that encouraging an assault on Congress "is not within the scope of employment of a Representative-or any government employee," experts said the action seemed to be intended to send a message to Trump, who is a co-defendant in the case.

"The government's filing sends a clear message... No leader in our government is acting within the scope of his employment when he acts to subvert a free and fair election by inciting people to riot and interfere," said Donald Ayer, a former senior Justice Department official in the Republican administrations of Presidents Ronald Reagan and George H.W. Bush.

In addition, he said that "the leaders who committed these travesties bear personal responsibility for their conduct."

During a rally on January 6, Brooks and Trump were named as co-defendants in a lawsuit filed by Democratic Representative Eric Swalwell, who claims they incited people to attack the Capitol and prevent Congress from certifying President Joe Biden's election victory. Brooks and Trump have denied the allegations. 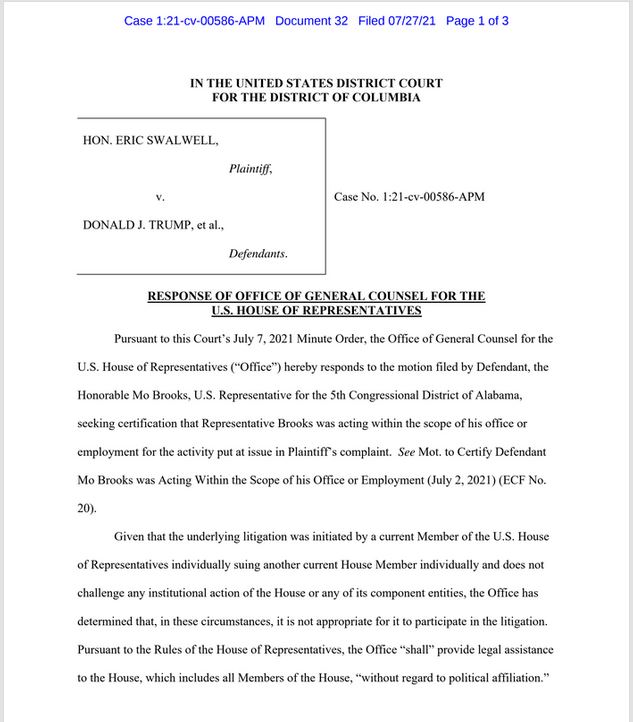 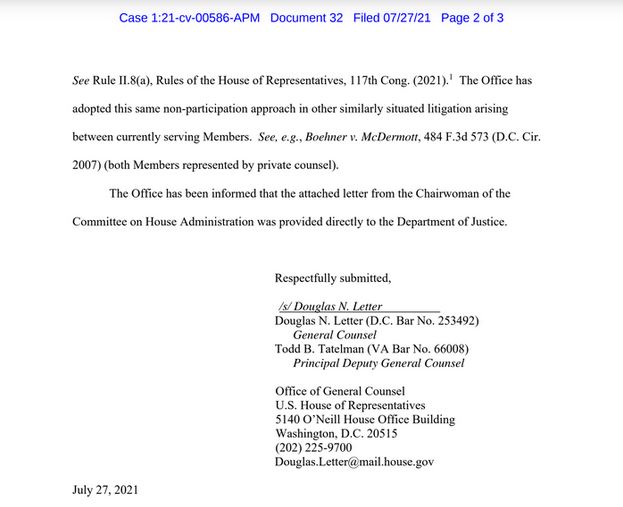 In two other identical cases, one brought by Democratic Representative Bennie Thompson and the other by two U.S. Capitol police officers, all of which were filed against him.

Neither Trump nor his attorney, Jesse Binnall, have publicly said that they plan to seek the Justice Department to intervene in the case.

Binnall issued the following statement: "The Supreme Court has said unequivocally that presidents can not be sued for acts that are directly connected to their responsibilities as president of the United States.

Addressing the American people on the subject of legislative action is a fundamental presidential responsibility. "

The Department of Justice did not respond to a request for comment.

Some Democrats were enraged by a pair of recent decisions that appeared to shield Trump or members of his administration, though legal experts said the decisions were intended to protect the office of the presidency rather than its former occupant. Trump's main legal argument in the Swalwell lawsuit has not been based on the Westfall Act, but rather on a legal theory that contends that the separation of powers clause in the United States Constitution gives the president broad protection while he serves as president.

"The ability to deliver rousing and contentious speeches is a crucial role of the president.

It is particularly true when, as is the case here, the President is pushing for or against legislative action, which is a rare occurrence. " In a May 24 court filing, his attorney explained the situation.

"Even if former President Trump is not protected by absolute immunity, as a governmental actor, the claims against him are precluded by immunity under the Westfall Act," the lawyer said in a footnote to the case.

President Trump's involvement in the incident is even more limited than Brooks', according to Tindall, who is defending two Capitol Police officers in a separate case in which they claim Trump incited the disturbance.

"Brooks is involved in the certification process.

He has one vote in the House of Representatives.

The Department of Justice determined that the behavior at issue in the lawsuit was not sufficiently linked to his vote. Consequently, "Tindall shared his thoughts.

"Trump has no part at all in this."

'It's Pathetic': Capitol Police Says GOP Reps Who Held Presser Outside DOJ Shouldn't Be In Congress