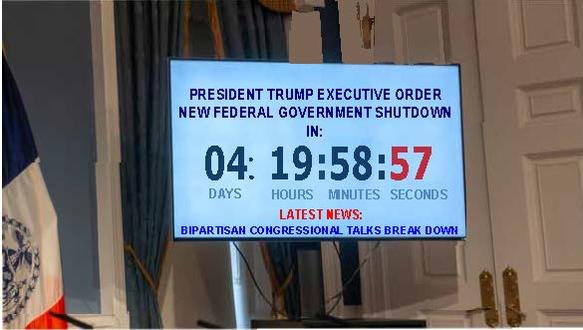 Fresh new fears over another US government shutdown grow.

In response to MSNBC host Joy Reid question of how do President Trump and his GOP supporters “keep up the fiction of violence” in border cities like El Paso. Tiffany Cross responded by saying…

“Yeah, I’ve been on Fox News before, and the problem is [Trump is] going on with a half-witted host who has an audience full of half-witted people who have no interest in truth or facts,” Cross asserted. “The real national emergency here is, Joy, a sea full if ignorant red MAGA hats who have no type of intellectual curiosity about these things.”

“There is nothing that supports this president’s lies. It’s just a bunch of people that have no interest in truth. They are fact-averse. Moreover, this is how he’s able to get away with this time and time again.”

Meanwhile, the intense talks between members of a bipartisan group of Congressional lawmakers to hammer out a border security deal and to prevent another government shutdown over border security funding broke down Saturday. Republican and Democrat negotiators have suspended talks according to sources close to and monitored the talks.

The key issue of contention is over detention beds; an issue that would normally be a side-issue in the negotiations over border security funding. Republicans are echoing a false narrative that Democrats want to limit the number of the beds immigration facilities may have on the border for “violent offenders.”

While talks could get back on track this week the reality is unless there is the breakthrough that leads to a funding deal, nine federal departments and related agencies, a new partial US shutdown could in again at the close of business on Friday.

Senate Appropriations Chairman Richard Shelby after confirming that talks are stalled, said on “Fox News Sunday” that he believes there’s a 50/50 chance that a deal will be reached while Senator Jon Tester, Democrat of Montana, said on the same broadcast that he was “not positive we’ll get to a deal.”

President Trump jumped back into controversy on Saturday with a tweet saying that if that if Democrats didn’t give him all the wall money he’s demanding, he might use executive action to build it. Democrats and Republican lawmakers have warned such a move would face court challenges and could set a dangerous precedent that could violate the closely guarded US Constitutional separations of powers, including Congress’ exclusivity of controlling our country’s spending.

Before talks came to a grinding halt on Saturday, there were reports that the bipartisan Congressional negotiators were close to an agreement that included a proposal for some modest border barrier funding in what amounted to a $2 billion deal.