Cohen Is Bringing Substantiating Documents With Him Tuesday 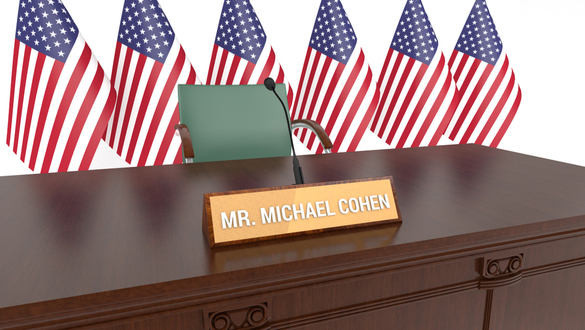 Expect fireworks on Wednesday when President Trump’s former personal lawyer and fixer testify before Congress. Cohen is expected to make some entirely new stunning accusations regarding Trump’s business and own life. Supposedly he’ll be bringing with him remarkable documents to prove what he says.

No one will argue that President Trump’s former personal lawyer, Trump Organization Council, and self-proclaimed fixer Michael Cohen doesn’t have some serious credibility issues. After all the last time he testified before Congress he committed perjury and has pleaded guilty to a-number-of felonies for which he is now preparing to serve three years in a NY upstate federal prison. He can also expect to be disbarred in New York and may face new felony charges by both the New York State.

Michael Cohen will begin three days of testimony, on Wednesday in front of the cameras, and then behind closed doors on Thursday and Friday. This time because of the credibility issues Cohen is reportedly coming armed with documents to back up his accusations regarding President, many of which will be new revelations.

Meanwhile, President Trump will be concluding his second day of his Vietnam Summit with North Korean Dictator in Hanoi, Vietnam more than 8000 miles from Washington D.C. as Cohen is sworn in to testify.

“He’s expected to address, first of all, his lies to those (congressional) committees on the timing of the Trump Tower and Moscow deal, the fact that it was going on much longer than he admitted in public and much longer than Donald Trump acknowledged.”

“We could have an absolutely dramatic and riveting performance by Michael Cohen. While he’s not allowed to talk about the Russia investigation when he appears before the House Oversight Committee in front of the cameras on Wednesday, he is going to talk about those hush money payments to women.”

“I’m told Cohen has been prepping with this for a long time, and he knows he’s got credibility issues, so he’s coming with documents and he’s got very detailed, sordid and, what (attorney) Lanny Davis has described as chilling stories of what how the president conducts himself behind closed doors.”

House committee members on Wednesday are also expected to question Cohen about Trump’s compliance with campaign finance and tax laws, potential conflicts of interest with his family business, Trump Organization business practices. Regarding the many revelations, Dilanian pointed out…

“We shouldn’t underestimate how powerful seeing a Trump insider who has been with Donald Trump for more than ten years telling these stories before the glare of the television lights.”

Bottom line, Cohen is reportedly bringing documents with him to support his new testimony and is rumored to have recordings.