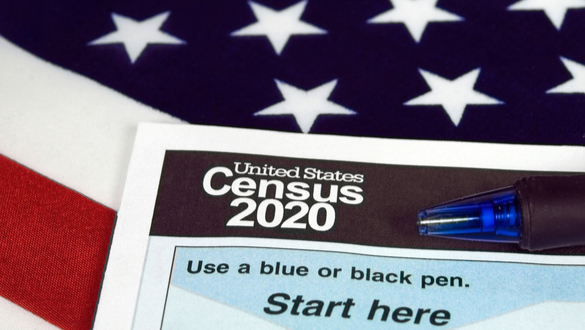 The evidence shows the GOP and the Trump Administration has committed perjury in Federal court to illegally engineer a 2020 census outcome that would disenfranchise potentially millions of voters. This morning Trump doomed any effort he takes to circumvent the Supreme Courts Decision.

President Trump mental acuity is in an ever sinking decline and is becoming impossible to ignore.

During his 4 of July speech Trump asserted that the Continental Army "took over the airports" during the American Revolutionary War in the 1770s.

In the same sentence, Mr. Trump dated the battle of Fort McHenry to the American Revolution, when it unfolded decades later during the War of 1812.

Trump said it was hard to read the teleprompter in the rain, a pathetic excuse for a man who claims to be “a very stable genius.”

The truth is more likely he’s never read the Constitution, never studied the Revolutionary War and has no understanding of our nation’s history.

Meanwhile, the lies and lawlessness of President Trump and his mental decline are being confirmed over and over when he speaks off the cuff. That’s what happened on the lawn of the White House this morning.

Trump speaking to a press gaggle on the subject of the 2020 census report admitted it’s all about redrawing Congressional Districts. This is precisely what plaintiffs who won the recent decision from the Supreme Court to remove the citizenship question from the 2020 census have been saying all along, and lower courts had ruled before the case was sent to nation’s highest court.

According to all information presented, the Census Forms must have begun printing to meet the legally established deadline this past Friday, June 28, 2019.

Trump admission to reporters, ignores the fact, the U.S. Constitution makes clear the Census is taken every ten years must count everyone living in the United States – not just citizens. Further congressional districts are to be based on the number of people living in an area – not only the number of U.S. citizens.

Trump then spewed the lie…  “If you look at the history of our country, it’s almost always been asked,” referring to a citizenship question. That was a lie, it has been asked on small, annual updates, but for many decades not on the constitutionally-mandated Census.

President Trump is attempting to kill the multi-political party system, here in the United States, and doing everything he can to engineer a one-party system that will rubber stamp his becoming dictator for life.

The citizen question on the census is now in Judge George J. Hazel of the United States District Court for the District of Maryland. At 2 PM, the Trump Administration is expected to argue it is still considering options to circumvent the Supreme Court’s Decision.  Judge Hazel has proven to keep up on President Trump’s Tweets and claims; he’s not likely to ignore his comments this morning.

Trump could try to go around the Supreme Court by issuing an executive order to include the question in the census. However, the Federal Courts are likely to issue an immediate injunction and hand the Administration yet another loss. In addition, an attempt to impose the question on the census is also likely to drive another 50-70 Democrats to call for an impeachment inquiry. There are now 81 Democrats in favor of an impeachment inquiry already.

Congressman Ted Lieu (D) nailed it with his Tweet… 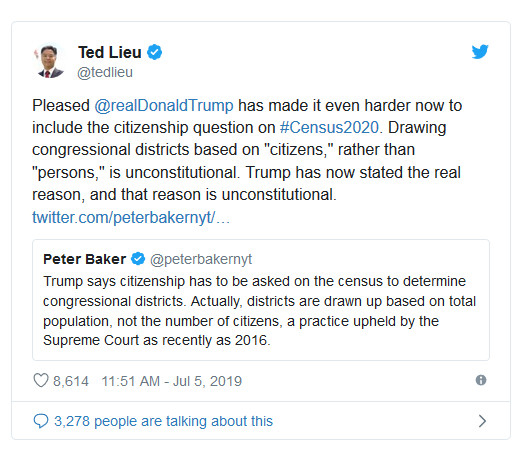 Aaron Blake, a senior political reporter for The Washington Post, came to the same conclusion of Reprehensive Ted Lieu: 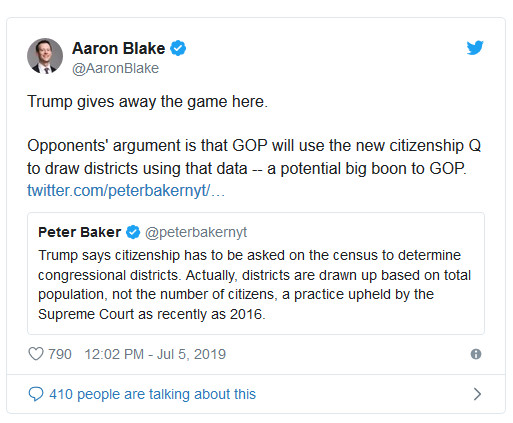