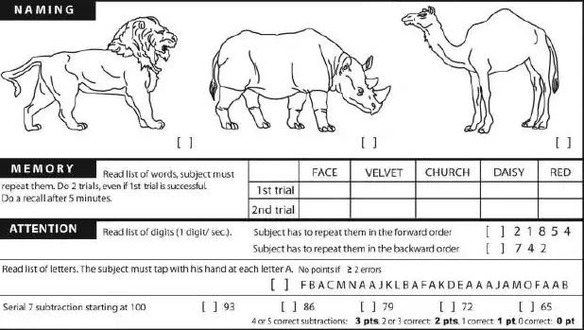 President Trump’s difficulty recalling information, interpreting simple graphs, and remembering what Chris Wallace said to him just minutes before, wasn’t funny. Even though it all took place as he denied there was anything wrong with his mental competence

No one who has honestly been paying attention the last 3 ½ years hasn’t noticed that President Trump has experienced moments during his public speaking or during interviews where he hasn’t appeared to be mentally impaired or not in control of his faculties.

The latest interview that aired on Fox News Sunday by Chris Wallace was at best a train wreck in which President Trump looked desperate to parry away doubts about his mental competence in ways that made him look like the TV cartoon, Mr. Magoo.

If you re-watch the interview, you’ll notice Trump’s inability even to remember what Chris Wallace said just minutes before.

WALLACE: Let’s start with the surge of the coronavirus across the country in recent months. You still talk about it as, quote, “burning embers.” But I want to put up a chart that shows where we are with the illness over the last four months.

WALLACE: Then — then it went down and now since June it has gone up more than double. One day this week 75,000 new cases, More than double —

TRUMP: Chris, that’s because we have great testing because we have the best testing in the world. If we didn’t test, you wouldn’t be able to show that chart. If we tested half as much, those numbers would be down.

WALLACE: But — but this isn’t burning embers, sir? This is a firestorm.

And, you know, it’s not just this country, it’s many countries. We don’t talk about it in the news. They don’t talk about Mexico and Brazil and still parts of Europe, which actually got hit sooner than us, so it’s a little ahead of us in that sense.

But you take a look, why don’t they talk about Mexico? Which is not helping us. And all I can say is thank God I built most of the wall because if I didn’t have the wall up, we would have a much bigger problem with Mexico.

TRUMP: Yeah. I think what we’ll do — well, we have them under travel ban, too, Chris. I closed them off. If you remember, I was the one that did the European Union very early.

But when you talk about mortality risks, I think it’s the opposite. I think we have one of the lowest mortality rates in the world.

TRUMP: We will take a look —

TRUMP: Can you please get me the mortality rates?

I heard we have one of the lowest, maybe the lowest mortality rate anywhere in the world.

Do you have the numbers, please? Because I heard we had the best mortality rate.

TRUMP: You said we had the worst mortality rate in the world —

WALLACE: I said you had —

TRUMP: — and we have the best.

The interview goes especially bad during the 130-second exchange during the sequence of claims made by President Trump to Chris Wallace concerning mortality rates:

Trump clearly is unable to keep straight where he thinks the U.S. mortality rate ranks. He goes back and forth between saying it’s “one of the lowest” and “the lowest.”

The exchange shows that President Trump is unable to remember what Wallace said just a two-plus minutes earlier. Chris Wallace clearly tells the President the U.S. has the “seventh-highest” mortality rate. Trump, however, asserts: “You said we had the worst mortality rate in the world.”

Wallace shows the audience the chart. This is it: 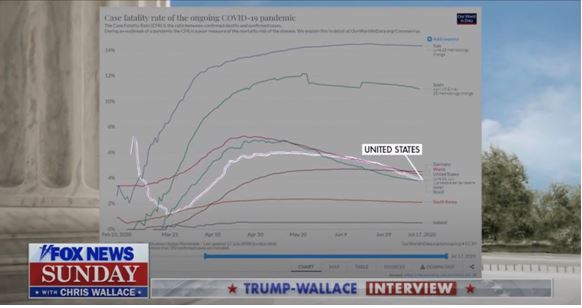 The inability to look directly at a line graph, and being unable to recognize that it’s not saying what the President is claiming could be a serious red flag that he has dementia, organic brain syndrome.

Many people watching the Chris Wallace interview of President on The Fox News Sunday shows jumped on the internet’s social media platforms, citing the same four examples of his struggle to keep things straight. Jonathan V. Last of the Bulwark.com cited three chilling warning signs. President Trump may in fact have dementia…

In another segment of the interview President Trump looking seriously at Chris Wallace made a cynical comment about Joe Biden.  Trump saying Biden “doesn’t even know he’s alive” and followed it be praising his mental health. President Trump then said he had taken a cognitive exam at Walter Reed Medical Center that was very hard and bragged to have “aced” the test so impressively that the doctors were “very surprised” and told him: “That’s an unbelievable thing. Rarely does anybody do what you just did.”

The Montreal Cognitive Assessment (MoCA), developed in Canada in 1996, was intended to be a means of accurately detecting levels of cognitive impairment. The assessments in the test attempt to gauge areas of language, visuospatial abilities, memory and recall and abstract thinking, to give a representation of a person’s current cognitive ability. There was no reason without the president’s physician concern for Trump to take a cognitive examination without there being an issue.

There are 11 sections of the assessment, with a total of 30 possible points: