Chinese Biotech close to Cures for Cancer, Malaria and even Hepatitis C Listed Here in The US Positioned to jump 10 fold! 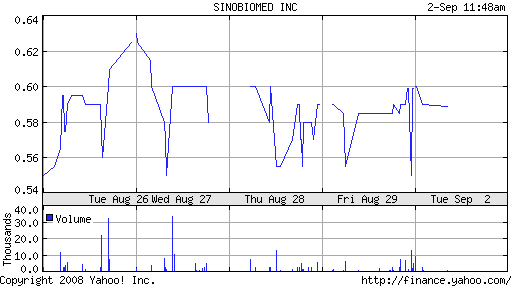 INCLUDING THE LEADING HEPATITIS DRUGS "APPROVED" IN CHINA

(1/3 OF WORLDS HEPATITIS PATIENTS ARE IN CHINA!)

• THE RECENT INFUSION OF NEW CAPITAL FROM VENTURE CAPITALISTS, SINOBIOMED IS POISED TO EXPLODE. The shares are already up 70% in a week!

Why? SINOBIOMED’S successful development of 3 of the most sought after medicines in the World!

Sinobiomed Inc. is a leading Chinese developer of genetically engineered recombinant protein drugs and vaccines. Based in Shanghai, Sinobiomed currently has 10 products approved or in development: three are on the market, one is awaiting approval, four are in clinical trials and three are in research and development. The Company’s products respond to a wide range of diseases and conditions.

Wanferon/Wanferin Treatment for Hepatitis B & C – already approved and on the commercial market. Wanferon/Wanferin, recombinant human interferon is for treating hepatitis B hepatitis C, viral infections and other conditions. Western health experts estimate some 60% of China's 1.3 billion people have been infected with hepatitis B alone at some time in their lives, and 10% are infected now. Chinese officials estimate the disease has infected more than 700 million Chinese. More than 400,000 people in China die (each year) from liver cancer and other liver ailments caused by the disease – the equivalent of more than 1000 per day!

China is home to one third of hepatitis B patients and at least one quarter of hepatitis C patients globally. With more than 1000 hepatitis victims dying each day, hepatitis is a major health and economic threat to China. Not surprisingly, the hepatitis drug market has received considerable attention from Western pharmaceutical companies aiming to capitalize on the China’s recent economic boom.

The Chinese hepatitis B and C markets have historically represented a significant growth opportunity, with a realistic current valuation of $1.0 billion and $0.9 billion for a combined total of $1.9 Billion in China alone. Many Western pharmaceuticals have sought Chinese FDA approval and Chinese acceptance but have failed. This is due in part to the high price commanded by Western companies and poor efficacy. Moreover, many Chinese patients shun Western Company drugs in favor of Chinese developers. THERE WAS ONLY ON COMPANY, SINOBIOMED, THAT SUUCESSFULY evaluated the unmet needs in China's hepatitis market and capitalized on these opportunities to invest in other medicines including a vaccine for malaria.

A VACCINE for MALARIA!

Malaria threatens more than 2 billion people globally and kills more than a million people a year – most of them children. In Africa, malaria causes the death of a child every 30 seconds. Malaria is endemic in over 90 countries. There are 3 to 5 million clinical cases of malaria per year and well over a million deaths. Over 95 percent of those deaths are in impoverished countries, mainly children under 5.

Those infected are disabled due to the severe form of the disease. And it's been calculated that malaria reduces Africa's GDP by about 1.3 percent per year. Sinobiomed’s recombinant malaria candidate vaccine (PfCP2.9) targets the world’s most deadly malaria parasite (Plasmodium falciparum) at its most destructive stage—its rapid replication in human red blood cells. Patented in China, U.S. A., E.U. and Australia, PFCP2.9’s current research schedule calls for the application to the Chinese Food and Drug Administration (SFDA) for the Phase II Clinical trial in malaria endemic areas to be submitted by end of 2008.

Over 50 years, imagine the United States developing 1.3 percent less over 50 years, that would mean you'd be half as wealthy today as you are. Now, imagine if there was a vaccine – what that worth?

The Company’s progress has been widely recognized and was even granted Chinese government funding of (US$1.24 million) to continue the clinical trial of its recombinant malaria vaccine and advance its development with partner Second Military Medical University (SMMU). The funding is the largest the Chinese government has ever granted to a biopharmaceutical company

3. ETHEOPHAZINE – Cancer Drug – Expected to be on the market in months! Cancer is now the leading cause of death in China. An estimated 6.3 million people die from cancer each year and the figure may double by 2020. The total annual sale of anti-tumor drugs in China is currently $1 billion and the market capacity for anti-tumor drugs is to grow by 17% to 20% in the next few years. There are about 1.6 million new tumor patients every year in addition to the 1.4 million patients under treatment. A Chinese patented anti-tumor drug, Etheophazine, entered Phase III Clinical Trial in fall 2006 and is expected to enter the market in April 2009. Etheophazine has wide-spectrum anti-tumor activity, high potency, low toxicity and chemical stability.

4. Leflunomide, - a drug for the treatment of rheumatoid arthritis.- already approved and on the commercial market Leflunomide exhibits both immunomodulatory and anti-inflammatory effects. It not only alleviates symptoms but also prevents disease from progressing. If administered in the early stages, Leflunomide can prevent joint damage and reduce morbidity

5. Recombinant Acidic Fibroplast Growth Factor (rh-aFGF) - already approved and on the commercial market is a Chinese patented treatment for ulceration, deep burns (greater than 2nd degree burns) and chronic ulcers caused by wounds, diabetes, vascular diseases and bedsores. rh-aFGF entered the Chinese market in August 2007 with a production volume of approximately 20 million boxes per year. The Chinese patent will protect rh-aFGF for 20 years from the date of issue in 2004. It will be also be protected as a new drug for seven years, which means that during that period the Chinese Food and Drug Administration (SFDA) will not accept any other company’s new drug application of aFGF in China.

Translation: purchasers of Sinobiomed at its current price of $.75 stand to reap a 1500% return. But wait; there are 5 other drugs that will fuel the share price of this undervalued gem. If you’re not convinced SOBM is a "BUY" yet, read on or watch the shares now at $0.55 rebound to their 2007 level of $3.50 before you buy.

The Nuts and Bolts About the Company

Sinobiomed is based in China

which is undergoing an economic boom, generating 12% of global economic trade, and it is currently the leading recipient of foreign investment. On top of this underlying growth, the Company's production facilities in China together with its patents provides for a material cost and market penetration advantage Sinobiomed has been and continues to be the recipient of both domestic and foreign investment from the most prestigious institutions including: The Bill and Melinda Gates Foundation.

The Chinese Government whose grant to the company was the single largest grant to a biotech " ever, and in August 2008, the company announced additional funding from Asian Venture Capitalist together with The Malaria Vaccine Initiative of the Program for the Appropriate Technology In Health and even The World Health Organization.

By mid 2004, Chinese Health Officials conceded that Hepatitis was crippling its swelling population. China had become home to one third of hepatitis B patients and one quarter of hepatitis C patients globally. One company, Sinobiomed, recognized this crisis early and rushed to develop medicine to treat victims of this disease. In 2005 Hepatitis continued to explode as more than 1 million new cases were reported in China alone. With the assistance of Chinese Government, savvy venture capitalists and humanitarian donations, Sinobiomed's team of scientists produced Wanferon/Wanferin, recombinant human interferon for treating hepatitis B hepatitis C, viral infections and other conditions.

Sinobiomed's patented Wanferon/Wanferin together with increased semi-mandatory screening have helped to reduce the devastating effects of Hepatitis, Hepatitis continues to explode while the Company is expanding its production capacity to meet Chinas vital needs as the disease continues to flourish via transmission from mother to child and transmission via blood transfusions . For the foreseeable future, hepatitis B & C remain a pandemic in China but the company is not stopping there as it is reinvesting its success into 9 other drugs, vital to the world.

6. RECOMBINANT BATROXOBIN (RBAT) The world's first batroxobin synthesized through gene recombination in a yeast expression system, rBAT prevents and treats surgical bleeding. Native batroxobin, extracted from pit viper venom, is world's most prescribed biological anti-bleeding agent. Since rBAT is produced through genetic engineering, it reduces the risk of biological contamination and neurotoxicity that have been associated with native batroxobin. Besides testing rBAT's effectiveness in surgical applications, Sinobiomed is also researching and developing an anti-bleeding kit for use in emergency situations, such as traffic accidents and combat. Patented in China, rBAT is expected to enter Phase III in late 2008

7. RECOMBINANT HUMAN STEM CELL FACTOR (SCF) A patent-applied-for bio-product in Phase 1 Clinical Trial, rh-SCF facilitates recovery of blood cell regeneration following radio-chemotherapy treatment in patients with malignant tumors. The estimated market launch date is December 2010.
Above are the company's drugs already on the market or are in final development stages.

8. Recombinant Human Regeneration Factor (rh-HRF) is a Chinese patented protein that is being developed as a potential drug candidate to treat acute liver disease. rh-HRF is a protein produced using biotechnology with biological activity in stimulating the growth of human liver cells.

10. Recombinant Human Trypsin Inhibitor (rh-UTI) is a Chinese patent-pending enzyme produced using biotechnology that is being developed as a potential drug candidate to treat acute pancreatitis.

ONE LAST POINT WHY THIS COMPANY'S SHARES ARE AN OBVIOUS STEAL!

Since the company is trades and is listed on the US exchanges it must comply with GAAP. One of Sinobiomed's buildings in China they paid approximately 1 million US, and under GAAP, the Co must list this building at the LOWER of COST or market value. Properties, especially commercial properties have exploded. One building, according to a Chinese real estate expert is worth $20 to $23 million in today's market, so on a pure real-estate liquidation value, just one of these buildings is worth 20 million more than is listed on the co's ledger.

Compare that to its $60 million market cap and we are looking at a company after subtracting the value of a building, which we are really paying less than $40 million for.

With 10 products approved or in development: three on the market, one awaiting approval, four in clinical trials and three in research and development, that's an average of $4 million for the exclusive rights for each life saving drug; compare that to any other biotech company and it is clear SOBM isn't just a bargain, it's a gift!